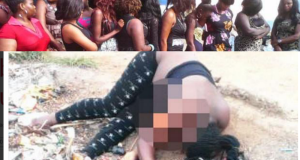 Several commercial sex workers in Abeokuta on Monday night held a candlelight procession in honour of their colleague, who was allegedly killed by suspected ritualists last Sunday.

People suspected to be ritualists, had killed and dumped the corpse of one 23-year-old Sitira at a refuse site at Oloomore junction, Abeokuta, in the early hours of the fateful day.

A chunk of flesh was severed from her right arm by her assailants.

The ‎late Sitira was said to have been thrown off from a moving Sport Utility Vehicle along the Abeokuta-Lagos Expressway.

However, on Monday, ‎about 50 commercial sex workers, plying their trade in Abeokuta, converged on the NUJ secretariat and also at the frontage of the nearby residence of former Head of Interim National Government, Chief Ernest Shonekan.

They identified their slain colleague wi‎th different names such as Titi and Folake.

Bearing lighted candles, they chanted various solidarity songs and rained curses on the unnamed killers of their colleague.

They later departed for the MKO Abiola International Stadium, Kuto, Abeokuta, another spot where they ply their trade to continue their mourning.

Speaking with journalists, some of them claimed that another colleague in the same business was killed by suspected ritualists alongside Sitira.

They explained that the mutilated remains‎ of the sex worker was uncovered in a ditch at the same Olomoore, Abeokuta.