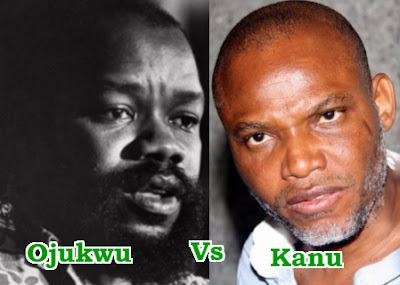 The secessionist insurrection of the Indigenous Peoples of Biafra (IPOB) took a dramatic turn in the week ended Saturday, September 23, during which the secessionist group was proscribed and its erstwhile boastful leader, Nnamdi Kanu, took to his heels when confronted with fired up soldiers. Reminds you of Biafra 1 – Emeka Odimegwu Ojukwu – who also went on the lam when federal troops closed in on him back in January 1970? At least, Ojukwu walked the talk of war, but this wet pants peed on only hearing the sound of guns! So much for the empty braggadocio. Also during the week, there was an international angle to the secessionist agitation as the federal government decided to name two countries – Britain and France – as collaborators in IPOB’s partitioning agenda.

Minister of Information, Culture and Tourism, Lai Mohammed, told the nation on Wednesday, September 20, how Britain and France have been tacitly complicit with IPOB in its destabilization of Nigeria. Britain, stated the minister, continues to tolerate Radio Biafra’s hate and incendiary broadcasts from London while France is said to be the financial clearing house of IPOB from where funds flow to the secessionist group. The minister had asserted: “Let me tell you, the financial headquarters (of IPOB) is in France, we know” and also posed a rhetorical question: “Who does not know that IPOB internal radio is located in London?”

Mohammed explained how Britain had been frustrating Nigeria’s diplomatic efforts with the British authorities to shut down the pirate radio station only to be given the nebulous excuse of freedom of expression. He had wondered: “If we have a person in Nigeria openly soliciting arms to come and fight in the UK, what would you think of it. Would you consider that freedom of expression? “. The minister implied that the two countries have been engaged in semantics or what I would call diplomatic jousting. Minister Mohammed spoke of “knotty diplomatic issues which you need to skip” only to add in a double talk “I don’t want any diplomatic row”. Of course, the minister knew the charges against the two countries would spark diplomatic skirmishes, perhaps low level, for now.

Well, these are trying times in Nigeria and nationalist fervour demands that the country must be ready to ruffle some diplomatic nests in defence of the sanctity of her territorial integrity and sovereignty. There is reciprocity in diplomatic relations. We need to remember that Britain and France have played ignoble roles in the international arena in recent times under the self-serving subterfuge called ‘International Community’.

Britain followed the United States to declare war on Iraq on the lie that Iraqi President, Saddam Hussein, had ‘weapons of mass destruction’ which must be neutralized. They ended up destroying that country and got its president hanged, as a rub in. Yet, Tony Blair, the then British Prime Minister, who stridently orchestrated Gulf War 11 could still face the world and declare that he had no apology for the destruction of Iraq, a country that has not known peace since.

Such brazenness! Such denial of criminal culpability by a British Prime Minister who had made a past time of pillorying President Robert Mugabe of Zimbabwe whose main offence was winning re-elections in his country. Apparently, Blair, with imperialist hang-over, wanted a regime change in Zimbabwe but met more than his match in President Mugabe, who once derisively called him Tony b-Liar. The old Zimbabwean war horse was right, Tony Blair lied on Iraq. So, if Britain condoned the Iraqi war, why is the Nigerian government peeved by the British High Commission’s statement condoning Radio Biafra’s hate and inciting broadcasts on the puerile doctrine of freedom of expression? The same Britain that shut down the internet when youths went on rampage in London on the excuse that they were using it to network and mobilize others for the riot.

Talk of diplomatic duplicity or double standard. The immediate past British Prime Minister, chubby boy, David Cameron, in an expansive mood, once described Nigeria as a fantastically corrupt country, another brazenness from a country that is fantastically a receiver of stolen funds, being the financial capital of the world, both legitimate and illicit. Well, it was good riddance, as the political gambler fantastically lost the Brexit vote that saw to his exit from 10, Downing Street, the Prime Minister’s official residence.

As for France, it supported Biafra 1 and facilitated Emeka Ojukwu’s exile in Ivory Coast, her satellite nation, so, it should be no surprise that it is the financial clearing house for IPOB, the leading agent for Biafra 11. France was indicted in the Rwanda Genocide of 1994, in which an estimated 800,000 Tutsis lost their lives, for being complicit with the then Hutu-led government. France also led the Western onslaught on Libya that saw the killing of Libyan leader, Muamar Gaddafi.

In 2011, France, brazenly thwarted the will of the Ivorian people, when under the cover of ‘International Community’ mandate, it provided military support for a candidate, Alassane Quattara, in Cote D’Ivoire’s disputed presidential election conflict to capture a sitting African President, Laurent Gbagbo! Gbagbo had won the majority vote in the main election and was pronounced winner of the re-run election by the country’s Constitutional Court only for the UN Representative in Cote D’Ivoire to assume the role of electoral commission to declare Quattara as the winner! Sadly, Nigeria’s naïve President Goodluck Jonathan, as ECOWAS leader, had endorsed the UN envoy’s verdict, and consequent UN mandate, which accorded French military partisan involvement a dubious legitimacy. Cote D’Ivoire is France’s milking cow, a situation President Gbagbo had ended, so the empire struck back. With Quattara, who is married to a French woman, in charge, France has returned to gravy train in Cote D’Ivoire while President Gbagbo languishes in detention at The Hague facing criminal charges at the International Court of Justice. The West sent Gbagbo to jail for a domestic conflict arising from an election dispute, but Tony Blair still struts around, a free man. Talk of the hypocrisy of the ‘International Community’!

Nigeria’s political leadership should be under no illusion about any affectionate love from Britain or France, and, by extension, western countries. Britain and France are yesterday’s countries, over whose empires the sun has set, now playing a fickle third fiddle in international power relations and struggling for residual relevance in Africa. Nigeria, on the other hand, is a country of the future with great potentials which some vested interests may not want manifested being a threat to their hegemonic hold. You see, no country in Europe has Nigeria’s landmass, natural resources or population. According to worldometers.info (2017) the combined population of Britain (66.2 million) and France (64.9 million) is 131.1 million compared to Nigeria’s 192.06 million while the combined landmass of Britain and France is 789,487 sq km as against Nigeria’s 910,770 sq km. Given these endowments plus high calibre human capital, the prospects of Nigeria as the great Black Hope is bright. We can now begin to understand why many countries would have dubious designs on Nigeria and would not be averse to its disintegration.

Continue Reading
You may also like...
Related Topics:kanu, Ojukwu