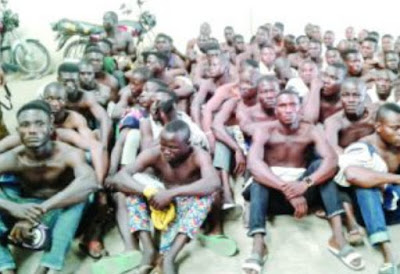 Lagos State Task Force has arrested the leader of Omeiji boys cult group and 75 others alleged to be terrorising Ipaja and Oshodi areas of the state. The alleged cult leader, Franklin, has been on the wanted list of the police for crimes ranging from robbery to bag snatching and selling of Indian hemp.

Chairman of the task force, SP Olayinka Egbeyemi, said the Commissioner of Police (CP), Mr. Edgal Imohimi, directed him and Divisional Police Officers (DPOs) to raid all criminal hideouts/black-spots across the state. He said that following the directive of the CP, the task force raided some criminal hideouts where Franklin and 75 others were arrested.

He said the raid was to make sure that criminal elements were not allowed the opportunity to plan and execute their nefarious activities, especially in the ember months.

Egbeyemi said apart from robbery and gangsterism, the hoodlums also destroyed government property. He added that government would not fold its arm and watch criminals destroy huge investment and infrastructural development across the state.

He warned parents to monitor their children as anyone caught in criminal acts such as selling/smoking illicit drugs, rape, robbery, cultism or any other nefarious activity would be prosecuted in accordance with the Lagos State environmental sanitation law.

He said: “We have arrested the most wanted Indian hemp dealer, who coincidentally is the leader of Omeiji boys cult group, Franklin. He has been on the wanted list of the police. The Saturday raid of the criminal hideouts paid off as Franklin and his second in command were picked up with bags of Indian hemp.

Franklin has confessed that he was the owner of the weed and that he used to supply the evil weed to his customers at Mushin, Ojuelegba, Fadeyi and Idi-Oro among other places.

“I want to assure you that with the constant raiding of criminal hideouts and dark spots, criminals will have no place in the state. That is why the CP has warned parents to monitor their children, as it is no more business as usual. We are after criminal and we won’t give them chance to operate in the state.”

He said Imohimi had directed that the suspects, including Franklin should be charged to court for prosecutions.

Boko Haram Terrorist Arrested In Isua Akoko Ondo Confesses “I Came To Yorubaland To Hide”
Ojukwu Vs Kanu: The Real Hero And The Coward With Empty Braggadocio