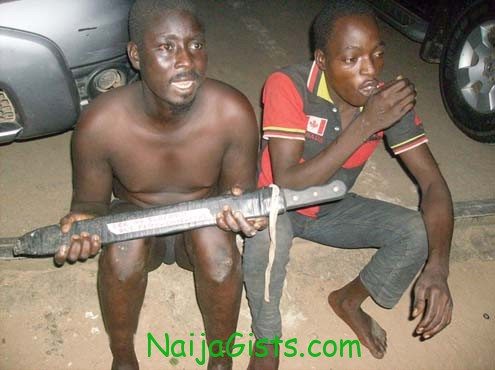 The suspects that attempted to slaughter an Okada man detained at the Special Anti-Robbery Squad (SARS), Ikeja, Lagos

The men were arrested in Ayobo, Lagos State by the Abba Kyari-led Special Anti-Robbery Squad of the Lagos State Police Command.

The suspects, Yusuf Marvel and Umaru Farouk were alleged to have lured an Okada rider at Lanre Bus Stop, Ayobo and tricked him to take them to Layeni Bus Stop.

They allegedly pounced on the hapless Okada rider at the bus stop, collected his money, motorcycle and were about to slaughter him with their knife when some passersby saw them.

They left the victim in a pool of blood and ran away but were chased by the passersby  who caught them and handed them over to the police.

The Okada rider was rushed to the Lagos State University Teaching Hospital, Ikeja, where doctors are battling to save his life.

One of the suspects, Umaru blamed his accomplice, Yusuf for hatching the plot, adding that he only assisted him to hold the victim.

Both suspects are to be charged to court soon, a SARS source told P.M.NEWS.

Continue Reading
You may also like...
Related Topics:man, okada, Slaughter