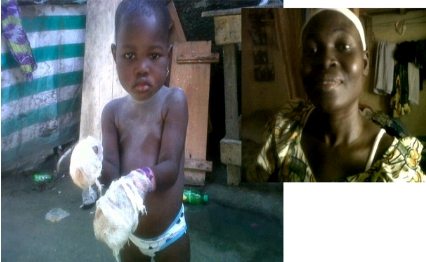 Concerned residents of Langbasa, a community in Ajah area of Lagos, are accusing a woman in the neighbourhood of causing a grievous harm on her two-year-old stepdaughter. Kehinde, as she’s known, is in trouble for allegedly dipping the two hands of her little stepdaughter, Esther, into oven-hot water.

The girl’s hands were boiled terribly, and many are raising concern that one of them might have become utterly useless. Esther, it was gathered, has lost her own mum about a year ago a few days after her first birthday. The poor little girl has since been living with her father, known among residents of the area as Baba Eleja. Baba Eleja, Esther’s dad, later brought in Kehinde, a mother of three, as his wife. He put Esther in the care of his new wife, Kehinde.

Trouble started for the woman on Wednesday, October 31. She wasn’t feeling good and invited a nurse to prescribe drugs for her. It was the nurse that noticed Esther’s boiled hands. The nurse also realised that the little girl was very unhealthy. She sought to know what was responsible for the little girl’s condition and Kehinde allegedly explained that the girl mistakenly put her hands inside a bucket of hot water in the room. Obviously not satisfied with that explanation, the nurse went to inform Kehinde’s neighbours about the strange development.

Many of the neighbours, who had all along suspected that all was not well with little Esther as Kehinde was always beating her, rushed to the room to see the girl. One of the neighbours, who described himself as her father’s kinsman, spoke to the reporter. His words: “When we saw Esther, lying on the floor with her boiled hands, we were moved to tears. We feared that the poor girl might die any moment from then.

We quickly made efforts to rush her to the hospital for treatment. I don’t think Esther was the one that dipped her own hands in the hot water. In fact, if you see that damage done on those hands, you would know that somebody must have dipped those hands in some boiling water. The hands were boiled to the wrist. Even that poor girl wouldn’t be able to use one of the hands again.” Another resident of the area, a woman, said Kehinde never spared the cane on the little girl.

“She is always beating the girl with canes. You can even see scars of the wounds that her canes inflicted on the girl’s body. Since we noticed what happened to Esther, we have moved her away from the woman. Earlier today, when the girl saw her stepmother, she was so terrified that she cried and ran away. That shows she (Kehinde) has been wicked to her. I advise the relatives of the girl’s mother to take her away from her father so that something more terrible than this doesn’t happen to her,” she told the reporter.

When Daily Sun sought to speak with Kehinde in her husband’s one room apartment in Olugbe compound in the community, her husband as well as some of her relatives wanted to prevent the encounter, saying they didn’t want the family’s dirty linen washed in public. Explanations by the reporter that since the matter had gone to the police, it had already gone beyond their private domain, did little to persuade the angry relatives. In fact, at a point, Baba Eleja got angry and rushed to the nearby Langbasa police post where he reported the “intruding” journalist.

Meanwhile, other relatives as well as the landlord of the apartment granted audience to the reporter and urged Kehinde to grant an interview. In the course of the interview, Baba Eleja suddenly materialised with a policeman in tow, apparently to get the ‘busybody’ arrested. But as soon as the police officer discovered the reporter’s identity, he asked the journalist to continue his job. He advised the enraged husband to cooperate with him. Amidst verbal invectives being hurled at her by neighbours and some relatives, who believed she did dip Esther’s hands into a pot of steaming water, Kehinde told the reporter her story: “It happened a few weeks ago.

That morning, I noticed that Esther was looking very dull. So, I asked her to come to me and I gave her a potty for her to urinate into. I discovered that the urine was black, which showed that she was sick. So, I didn’t allow her to go to school. That day, I was also bleeding because I just had a miscarriage. After a while, I kept a bowl of very hot water that I wanted to use on myself beside our bed and rushed out to the kitchen. Suddenly, I heard Esther’s piercing cry and I rushed back into the room only to see her struggling with the bowl of hot water.

By the time I could rescue her, she already boiled her two hands. I thought she wanted to drink water because she was eating the rice that I cooked for her and my own children before I left the room. I quickly went to borrow N100 from a neighbour with which I bought some balm that I applied on the hands. I also gave her some drugs for her fever and she soon slept off. “When her father returned from work in the night and noticed what happened to her, he beat the hell out of me, in spite of my condition. It took the intervention of our landlord before he left me.

Since then, Esther has been staying with me at home. She has not been going to school and I’ve been doing my best to treat her. “But a few days ago, I invited a nurse, who is also a neighbour to attend to me. As a result of the miscarriage, I have been feeling very weak and I have lost a lot of blood. The nurse came and I was lying on the bed. Esther was resting on a mattress close to the bed.

The nurse came to attend to me but when she saw Esther, she looked worried and asked what happened to her. When I explained, she asked why we didn’t take her to hospital yet and I said I didn’t have the money and that I was expecting that Esther’s father would do that. “The nurse promptly attended to me and hurriedly left after examining Esther’s boiled hands for two or three times. It wasn’t long after she left that a crowd of neighbours broke into our room to see Esther.

They soon pounced on me and started beating me. It took the intervention of policemen, who were invited by some of them, to rescue me from the mob. I would have been lynched. They thought that I deliberately dipped her hands into boiling water. I didn’t do that at all. I have always been taking care of Esther as if I were her mother. Even people call me Mama Esther because of the way I treat her. I couldn’t have done such a terrible thing to her.” (DailySun)

What a heartless woman! Can she do this to her own child?