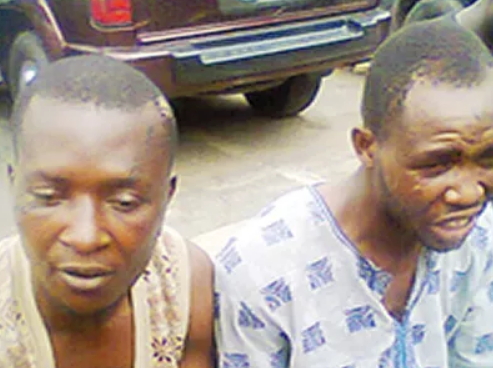 Chikwo Okechukwu, 25-year-old robbery suspect recently told operatives of the Special Anti- Robbery Squad (SARS), Ikeja, Lagos State Police Command, that he would kill his own brother if he found him indulge in criminal activities, let alone robbery. According to Okechukwu, he has learnt from his mistakes and will not like his brother to fall into the same pit.

Okechukwu was arrested alongside his friends, Mathew Adigo and John Adigo. They were alleged to have robbed a cyclist of his motorcycle at Oremeji bus stop in Shasha area of Lagos on May 11. Okechukwu, a father of one, confessed to have been stealing motorcycles since 2017. He embraced the crime after someone waylaid him and snatched his motorcycle.

The suspect added that he had only engaged in two robbery operations. He said that the first operation was a resounding success but the second, a total failure.

Okechuku said: “I started robbing cyclists of their motorcycles after I was robbed of mine. Robbing is a bad thing to do, but I had no choice than to become a robber. I needed money to buy a new motorcycle.

During operations, I use hammer to threaten the victims. But I have never harmed anyone.” Revealing his modus operandi, Okechukwu disclosed that he and one of his accomplices would join a motorcycle, pretending to be passengers.

He said: “Once we get to a quiet area, we would alight and beat the cyclist into submission. We would dispossess him of his motorcycle and sell it.” Narrating how they were arrested, Adigo confessed that they joined a motorcycle, pretending to be passengers. When they got to a quiet area, Okechukwu immediately attacked the cyclist. He added: “Okechukwu is our ring leader.

When we got to a quiet street at Shasha, he was bold enough to tell the motorcycle rider to stop. Immediately the cyclist stopped, Okechukwu hit him with a hammer.

As Okechukwu hit the rider, who is a Hausa man, with a hammer, the rider resisted and shouted for help, thereby attracting people. We were caught and beaten mercilessly.” According to Adigo, he and Okechukwu would have been lynched, but for the quick arrival of policemen to the scene. Items recovered by the police include a hammer and Boxer motorcycle.