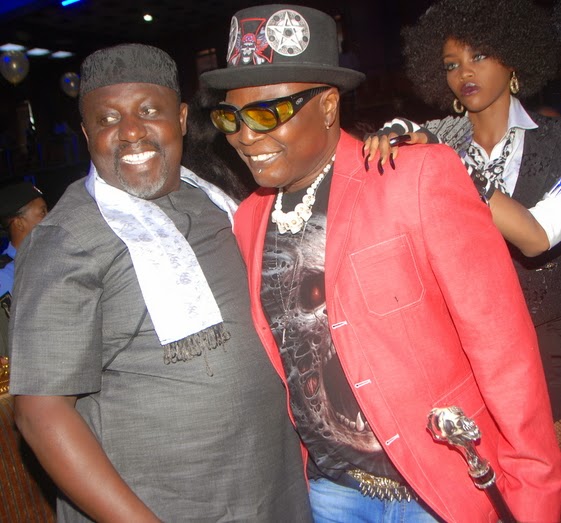 A statement by his spokes­man, Sam Onwuemeodo yesterday said “It is highly regrettable that the son of the late Justice, Mr Charles Emeka Oputa, aka, Charly Boy threw caution to the wind and turned the church service into a political theater that saw him acting or play­ing out the script he drafted in Abuja with some Imo poli­ticians who have remained cowed by the overwhelming popularity of Governor Ro­chas Okorocha.”

While expressing surprise at the sudden turn of events, the statement said “the Imo State governor had worked together with Mr Charly Boy both when the late Jus­tice was sick, until the time he died and the preparation for the burial which also en­couraged the state governor to make substantial financial input and also organized a special day of tribute for the late Justice at the expense of state government with Charly Boy also present with other members of the family.

“This is why the sudden change of character of Charly Boy at the church service, in which case, he insisted that the governor would not talk as protocol demanded could not be understood, except that he was acting out the script handed over to him by some of the gubernatorial aspirants from the state who might have been rattled by the thunderous ovation that greeted the governor by the crowd when he was first in­troduced.”

The state government fur­ther explained that “at a func­tion like that, protocol had demanded that the host gov­ernor must talk before any other speaker. But Senator Pius Anyim representing the President was first called to talk. Ideally, as a represen­tative of the president, there was no way Senator Anyim would not have talked at the event. But protocol would have seen the governor talk­ing first to welcome the invi­tees to the service as the host governor.

“Perhaps afraid of the popularity of governor Okorocha among the Imo populace that has always made them to hail him where ever and whenever he talks, the few politicians from the state in Abuja who are des­perate to capture power in the state in 2015, saw a willing tool in Charly Boy for them to ensure that the governor would not talk at the event.

“We condemn that ugly in­cident. And also wish to ad­vise politicians from the state to stop heating the polity over power since God is the giver of power. In 2015, God will decide who will govern Imo State and when God decides that, there is nothing anybody can do about it.”

7 thoughts on “Okorocha: Abuja Politician Sent Charly Boy To Disgrace Me At His Father’s Funeral”