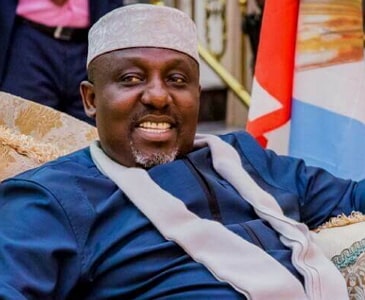 While pursuing his feudal aspiration in Imo, Rochas Okorocha would appear to be reading Igbo history book upside down. Several decades after warrant chiefs appointed by the imperialists failed in Igbo land, how pathetic that the Imo governor still thought he could brandish an expired talisman and get a different outcome.

The British assumed they were clever then. Since the Igbo were largely Republican and therefore unamenable to easy colonial predation, they resorted to assembling local quislings and robing them in royalty to lord it over their communities. The people, in turn, first chose to amuse themselves by watching the upstarts adjust their borrowed robes, revolting only after being asked to pay taxes to the white man.

Armageddon would be let loose in places like Aba where women famously tumulted in 1929.

Like the haughty warrant chief of old, Okorocha sought to dismantle democracy in Imo and erect a counterfeit monarchy. Until his sequined amulet failed him in the recent APC governorship primaries in Imo.

Even among foraging gluttons, a code of conduct – even honour – is still expected. In the case of the Igwe of the Douglas House in Owerri, the trouble is that he attempted to take too much for the owner not to notice.

Until the cookie crumbled, Nwosu had, in turn, begun to act the part. Whenever bullies taunted or whipped him in the neighborhood, he crawled back to the big daddy for a nose-wipe. He still dresses like his father-in-law. He tails him everywhere and mimics his idiosyncrasies. Perhaps, what remains to fully resemble the great Owelle is for him to grow a pot belly as well.

Of course, Nwosu’s candidacy would also mean Okorocha’s daughter potentially taking over from her mother as Imo First Lady. With the governor anticipatorily awarding himself the Orlu senatorial ticket as part of his “retirement package” next year, and the wife also moving to Abuja potentially as House of Reps member, apart from the distinction of already being the queen’s mother in Imo. (Speculations had it that another of the Okorocha clan had been pencilled in as Nwosu’s running-mate!)

Already, a sitting Minister from Imo (Prof. Anthony Anwukah) is father-in-law to Okorocha’s second daughter who, in turn, represents Imo on the board of a federal college of education. The Igwe’s younger sister is deputy Chief of Staff and doubles as Commissioner of Happiness. His son is APC’s House of Assembly candidate in Ideato. His eldest sister is said to manage all markets for the government, while the elder brother handles motor parks. Another sibling controls sand dredging across the state.

Never in the history of otherwise fiercely independent Igbo nation has feudal enterprise been this extensive and audacious.

So, now, you probably only need Okorocha’s Suharto cap, false smile and gaudy sash to frame the new perfect portrait of political greed.

By the way, the credit for coining the word “Oko-croach” actually belongs to a world-renowned literary deity of Nigerian provenance in a lamentation voiced to a privileged circle when the latest chapter in Okorocha’s long-running circus opened.

In one of an earlier two-part series, yours sincerely had indeed expressed puzzle at the nature of charms Okorocha was invoking to hypnotize Imo people – some of whom are thought to be scions of giants of Igbo history – into slavish acquiescence.

Added to that is the infamy of erecting statues indiscriminately for those classified as heroes/heroines by Okorocha’s questionable standards. Or folks engaged in private business with him or those seen as potentially helpful in whichever direction the Igwe might wish to spread his commercial tentacle later.

Not surprising, one of those so considered is the shifty Jacob Zuma, who has since been dethroned as president in South Africa on account of monumental sleaze.

What made it even more laughable – if not treasonable – is that hundreds of millions of Naira was being splurged on such obscene statues and the unveiling ceremonies at a time workers were owed huge backlog of salaries and cheques issued pensioners were bouncing all over Imo.

Having thus subjected the acclaimed “heartland” of the South-east to such unscrupulous privatization racket in the past seven and a half years, Okorocha apparently could not think of a better finale than having his son-in-law succeed him.

But the Igwe underestimated the guile of the so-called Allied Forces. They understood the power of ambush and surprise. By plotting stealthily and pooling their forces together, they succeeded in outfoxing the garrulous Igwe to the party ticket eventually. Alas, the huge war-chest of dollars could not save Okorocha. (Someone alleged he was offered a bribe of $2m to rig the primaries but chose to vote his conscience.)

Now, with his imagined fantasy political castle fast turning a mirage, it will perhaps require a miracle of biblical proportions if Okorocha will not have to depend solely on overdose of sedatives to battle insomnia for the remainder of his tenancy at the Douglas House.

His possible anxiety would not be hard to situate. Denied the pleasure of picking his successor, Okorocha now has to face the worst nightmare of an insecure outgoing governor – the possibility – if not certainty – of a hostile take-over. Won’t the book of contracts be revisited? Won’t the unmarked graves be discovered and excavated and the hidden skeletons uncovered with malicious glee?

Back in 2011, Okorocha hardly waited to be sworn in before exercising power. Long before the inauguration day, not a few banks received threat letters from the “Office of Governor-In-Waiting” against honoring cheques issued by the then outgoing governor.

Now, opponents seem too impatient to even allow elections hold before pulling Okorocha’s legs. One of the opposition candidates has tellingly adopted the slogan, “Recovery Mission”, in what hints darkly of a revanchist plot against Okorocha’s “Rescue Mission”. He took a step further by announcing a “caveat emptor” on all the transactions by the present administration, with particular reference to land deals or disposal of government assets.

Meanwhile, Okorocha, who sermonises on equity and justice outside, has continued to practise evil and impunity at home. Okorocha who has been thumbing his nose serially in contempt of court orders on the deputy governor (Eze Madumere) is also the one on the rooftop today flaunting, without shame, court papers purportedly restraining the national leadership from barring Nwosu’s candidacy.

But without quorum and against a subsisting court order, Okorocha’s own faction in the state assembly had declared the deputy governor (Eze Madumere) impeached in July for nothing more than a temerity to eye the stool reserved for his boss’ son-in-law.

Reminded of the futility of the exercise in the eyes of the law, the crafty Igwe thought he could outsmart justice. By the time the law would arrive to rescue DG, he seemed to have calculated, the tenure would have lapsed, thus rendering the whole exertion a mere academic exercise.

But in a rare apportioning of poetic justice, the law rose redemptively for the DG a few weeks ago by quashing Okorocha’s kangaroo impeachment and restoring Madumere to office. Ever lawless, the Igwe responded by inventing new avenues to mock the law. According to reports, staff and security team attached to the DG’s office have been posted out. So, technically, that office now stands abolished! The Owerri prince is however free to parade himself as DG, if that will make him happy.