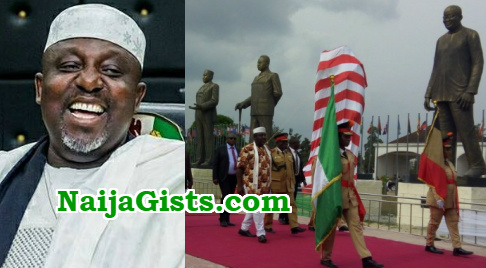 I believe one reason Governor Rochas Okorocha of Imo state is very desperate to foist his son-in-law as successor in 2019, is to protect his many erections across the state. Who in the governor’s position would risk leaving those erections which attracted admirations from well-wishers as well as scathing remarks from jealous people, in the care of a total stranger as successor, with all the consequences?

I recall that Okorocha had as part of his legacy erected the statues of some foreign dignitaries, including the fallen South African President, Jacob Zuma, a man who made a show of his prowess in that business. The Zulu warrior has since been in and out of court defending allegations of graft that trailed his two-term presidency. Talking of allegations of graft, one more reason Okorocha must be having sleepless nights over the intra-party primaries of the All Progressive Congress (APC) in Imo state, is the way he ran the state.

His Excellency, who is not known to do things in half measures, ran the state as a fiefdom. With his wife, daughters, in-laws and friends manning all the resource gates, Okorocha has lived the life of an Arabian Prince and American billionaire rolled into one. Of note, His Excellency brooks no checks with respect to the control of the state resources. Whenever his tenure ends, his style will be a study in how to concentrate power in the hands of the first family, regardless of what the constitution says.

In his first term as governor, I had written on how Okorocha dribbled those who he encouraged to vie for the local government elections that never held. Promising an unprecedented type of local government administration, Okorocha encouraged the budding contestants to waste their resources through all manner of subterfuge. His people organised fake trainings, fake mock elections, fake time table and other fake programs to wet their appetite and give the impression that something different from the usual was afoot. A closer study may show some similarities to Gen Ibrahim Babangida’s infamous transition programme.

As unbelievable as it sounded, the tale is that once you have settled access to being in his presence, and you indicate serious interest in doing a particular road, His Excellency will ask you whether you can do it, and if you enthusiastically say yes, he will ask you to go ahead. That perhaps explains why there are more excavations of peoples’ fences in anticipation of expansion of roads in Imo state than in any other state. Subsequently, the coterie of family members will arrange the contract papers and cash payments.

A man considered by many as full of conceit, Okorocha surely loves his family. In fairness to the governor, he is blessed with beautiful daughters and handsome son-in-laws. I am sure many Nigerians usually envy the first family of Imo state as they dig it out at their several social outings looking more like dancing competitions. Whether at wedding ceremonies or other feel-good parties that has enriched the YouTube, Okorocha despite the evidence of a past misfortune, surely rocks. The latest video is that of the home coming of BBNaija 2018 winner, Miraculous Igbokwe, strangely named education ambassador of the state.

Talking of miracles, Okorocha surely is a believer in miracles. When those whom he had derided in the past as Abuja politicians outsmarted him in the APC ward congress, few days ago, the governor sought for miracle in Daura, Kastina state. His Excellency must have remembered the miracle of Damman, Saudi Arabia, when Nduka Ugbade led U-20 team, came from 4-0 down, to beat USSR at the 1989 FIFA World Youth Championship. The tragedy for the state though, is that some of those angling to take over the party from Okorocha are worse political scoundrels.

So, desperately, His Excellency has been up and about in search of political miracle. He went to ask President Muhammadu Buhari, who was in his constituency to answer for his decisions as an elected official, to send paratroopers all the way to Imo state, which bears the acronym, the heartland of Igbo land, to change his electoral misfortunes miraculously. Hmmm. Yet, when the circumstances suits, Okorocha and his colleagues will mouth true federalism.

The mere fact that His Excellency, the executive governor of Imo state, believed the president can and should intervene in his favour, without regard to due process, shows the depravity of our politics. How Okorocha who rules Imo as a private estate, who created fanciful community organs as fourth-tier of government, who tore communities into several autonomous communities and installed tenth grade Ndi Eze, as traditional rulers, would now be so helpless to seek miracle in faraway Daura, is another object of study for political scholars.

The object of this piece is not to rub salt into Okorocha’s political wound. No, there is enough of that in the social media. My concern is that Okorocha who is the highest political office holder of Igbo extraction in the ruling APC, did not just bungle his political future, he surely turned a bad reference point of the change agenda that the party promised. I can imagine members of the dominant party in the region, the Peoples Democratic Party (PDP) having one more reason to mock the APC in the zone.

Okorocha by his unforced errors has dipped the fortunes of the APC in the south-east. Not so long ago, I had advised him to provide better leadership for the party in the zone, and even seize the chance his position as the only governor from the ruling party trust on him, to work hard to merit a senatorial position, and if the fortunes of the party permit, to be the ambassador of the party in the 2023 presidential election. My advice was for him to plan long term, but obviously he felt that planting his son-in-law in the Douglas House in Owerri was more expedient.

Continue Reading
You may also like...
Related Topics:gabriel amalu, Okorocha