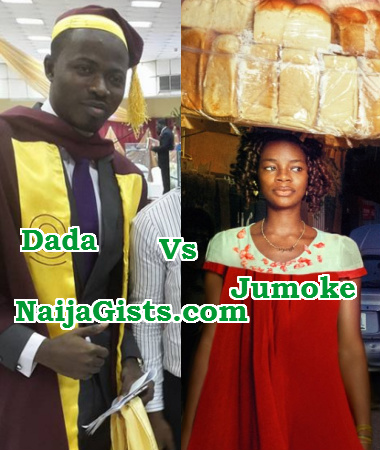 “Some people insist that ‘mediocre’ is better than ‘best.’ They delight in clipping wings because they themselves can’t fly. They despise brains because they have none.” ~ Robert A. Heinlein

Until the news of Ese Oruru ‘abduction’ came into the cyberspace, the nation especially the Facebooking and Tweeting activist children were falling over themselves on who can make the most motivational post and tweet concerning Olajumoke Orisaguna, the Agege Bread seller turned celebrity overnight, courtesy of her photobombing a photo session by celebrated photographer and songstress, TY Bello.

Olajumoke story typifies the fairy tale story of sudden grass to grace, an amazing Cinderella fiction that was happening before our very eyes. No matter how critics tried to dismiss it as a planned work by TY Bello, many of us refused to believe them. We called them envious children of Lucifer who see nothing good in sudden success of people. To us, they wanted to spoil the fun of our posts and pour sand into Olajumoke garri.

Just type ‘Agege’ on the search engine and the name of Olajumoke spring up. That is how popular she has become. As we speak, many brands including a bank that will not even employ her while she was in the street has made her their brand, with many others following suit. Success is truly a friend of everyone.

Few weeks later, a more brilliant news hit the social media, but no one really cared. The news was such that a record that may never be matched in a century was made and the only word Nigerians could mutter was “congrats”, and they moved on. Yes, Ayodele Dada, a student of the University of Lagos (UNILAG) did not only emerge as the best graduating student of the school but came out with 5.0 cumulative grade, a record never set in the history of Nigerian tertiary institution.

Rather than celebrate this national genius and talent, we have become ethnic with it calling on the governor of Ekiti State, Ayodele Fayose to come to his aid, since he hails from there. What manner of people are we? Did Dada tell us that he is in need of aid or help? We are the one in need of help and aid. We are the one that needs Dada and not him needing us. We are the one that needs his raw intelligence to help us move forward as a country, not him begging us to come to his aid.

Are we truly a cursed nation that celebrates mediocrity above merit and hard work? For heaven sake, Olajumoke never worked hard to get brands falling over her. Olajumoke never did anything that is worth honor. Olajumoke never gave us motivation to strive harder, even though most of us have tried to create motivations out of her, an act I am also guilty of. She cannot pass as a role model for anyone, yet Stanbic IBTC bank begged her to be their face. What an irony of misplaced priority.

Let no one say or insinuate that I am hating Olajumoke here, for I don’t. Anyone in doubt should visit Fejiro Oliver Facebook timeline and see where I invented reasons why Olajumoke should be celebrated and encouraged. This is beyond emotional sentiments, but retracing our values as a nation and a people.

We do not even need to campaign before Dada is given his place of pride in the nation, for what we could not do, he has done it. Wait, he didn’t achieve it in splendor but worked his way towards it by doing menial jobs and selling to see himself through school. Now that is what is called Excellence, not some lucky chap who was fortunate by photobombing and turned a model. Dada is our national symbol that even in the midst of pains and anguish we face, we have people who preserve and are resilience in whatever they do. Dada is our national conscience that despite that bad education we are face with; there is hope and light at the end of the tunnel, if only we ignore everything facing us and focus on the task at hand.

Agreed that MTN has done something, but that is a lazy and non idealistic way of celebrating such academic excellence. What is a personalize phone number, latest Samsung Phone and airtime for 2016, that Dada cannot afford. As I write, he is about to be evicted from his house, and if tomorrow he decides to travel abroad where his brain will be appreciated, we will have to pay million to invite him just to be a consultants. We will be the one crying brain drain when we do not celebrate our very best.

The young man should be celebrated not just by brands but the nation. This is where serious products who truly know what excellence means should invest in and not into bread and butter. I expected big multinational companies to begin to bid and fall over themselves just to grab the young chap, and come out with creative adverts like “…BECAUSE WE CARE ABOUT YOU, WE PICK THE BEST”, “ONLY THE BEST IS GOOD FOR YOU…”, “…THE TOP OR NOTHING” etc. I can bet that in less than a week of any company doing such, they will see the result never seen in one year. I can stake my Secret

Reporters News brand name that in less than a month of getting Dada into their company and making him the face of their products, they would recoup all the millions and more spent in getting him on board.

But who will do this? They will rather go for a reality show where girls go naked, have wild sex with some unknown guys from another country. They will prefer to go for those who will sing for few years and fade away, jettisoning academic brilliance that will be passed from generation to generation. How shortsighted are we as a nation.

If this was a sane country where normal people live, we do not need a prompting, hashtags or write ups to celebrate Dada. In a country where they think of the future, Dada will not be the one telling us that five firms are after him; rather firms will be the ones holding press briefings on how they have snatched away the genius from other bidders. Wise politicians who know what they are doing ought to have seen this as a venture to encourage education, citing Dada as a reference point and even make him their brand for academic scholarship.

Celebrating Dada is beyond Ekiti State. He is the hope of the future and to celebrate him we must. Let the challenge begin.