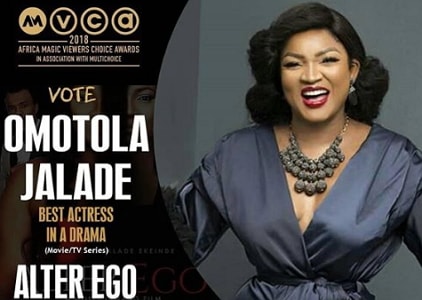 Nollywood icon Omotola Jalade is eyeing an award at the upcoming 2018 edition of Africa Magic Viewers Choice event.
The mother of 4 whose last movie, Alter Ego picked 9 nominations wants fans to give her more vote in order to win the “Best Actress In A drama series” category.

Here is how she called for support on the social media few hours ago.

All fans of Omosexy make una vote for your idol.

How To Vote For Omotola

Mercy Johnson Afraid Of Losing Husband To Juju Ladies.. Desperate Steps She Is Taking To Keep Her Man
Jim Iyke: I Quit Acting Because Nollywood Producers Can’t Afford My Fee