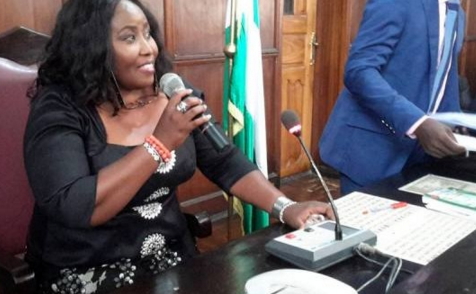 Ondo House of Assembly Speaker, Hon. Jumoke Akindele and her deputy, Hon. Fatai Olotu were late Tuesday night impeached by some members of the AssemblyA source in the Assembly alleged that the exercise was carried out by 18 out of 26 legislators that constituted the Assembly.

The Assembly has 21 People’s Democratic Party (PDP) members while the rival All Progressives Congress (APC) has five.The impeachment was said to have been carried out around 10.30pm in a resident of one of the aggrieved lawmakers.

The letter containing the signatures of the 18 lawmakers that carried out the exercise was scanned and sent to journalists at about 11.00pm.

Though, no reasons was cited for the action of the lawmaker but sources within the Assembly said that the lawmakers impeached the principal officers because they have failed to fight for their interest with the State Governor Olusegun Mimiko

The source alleged that the officers had become the stooge of the governor. [Daily Telegraph]