The reckless driving of the driver conveying Ondo State Deputy Governor, Ali Olanusi to a ceremony in the early hours of today has claimed four lives.

According to sources from Ondo State, the fatal accident happened around 10am on Aponmu Owena road off Ondo road.

A young boy travelling with Oba Taofik Olaposi, the Osomakinde of Ife Tuntun in Osun State and three other people were killed when a white Toyota Camry driving the monarch got involved in the over-speeding convoy of Ondo state deputy governor. 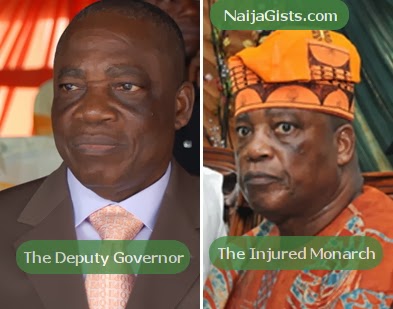 The traditional ruler who got injured in the accident has been transferred to a private hospital in Akure where he is currently receiving medical treatment.

The dead bodies of the four deceased have been transferred to a mortuary at a specialist hospital in Akure.

As a precaution, the deputy governor who didn’t sustain any injuries was taken to the Government house in Akure where doctors examined him for internal bleeding.

May the souls of the deceased rest in peace.