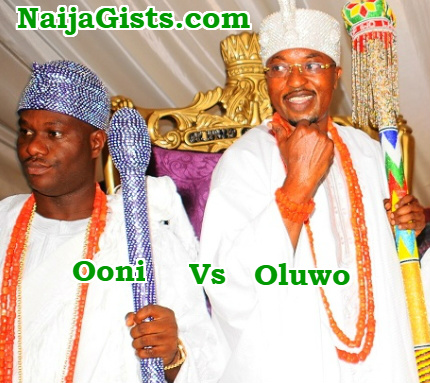 Feb 3rd, 2018 – Tension As Ooni Of Ife’s Chief Security Officer Pushed Oluwo Of Iwo Out Of The Way For Blocking Ooni’s Access To His Seat At Presidential Hotel In Port Harcourt

The recently concluded traditional rulers summit in Port Harcourt River state was marred by an unpleasant fight between the Oluwo of Iwoland, Oba Adewale Akanbi and the Chief Security Officer of the Ooni of Ife, Oba Adeyeye Ogunwusi.

According to eyewitnesses, the tense situation could have turned into a bigger issue if not for prompt intervention.

The incident occurred at the Presidential Hotel in Port  Harcourt on Tuesday.

It was gathered that the Ooni of Ife ,Oba Ogunwusi had just finished giving a vote of thanks, and was on his way back to his seat when his CSO, Mr. Emmanuel Olawale Kolawole, who led other security aides of the monarch allegedly had a brush with the Oluwo, who appeared to be blocking the Ooni from accessing his seat.

The Oluwo, it was learnt, was by then discussing with the Minister of Interior, Lt Gen. Abdurahman Dambazzau, who shared the high table with the Ooni and the Rivers State gover, Nyesome Wike.

A source in the Oluwo’s court who witnessed the incident alleged that the CSO out of overzealousness, threatened to push the monarch if he did not give way for Ooni to pass.

He was said to have ignored Oba Akanbi’s entreaties to “take it easy” and pushed him out of the way.

It was at this point that visibly upset Oluwo stepped aside to allow Ooni to have access to his seat.

Though the report was later denied by an aide to the Ooni, it was however confirmed by dignitaries who chose to remain anonymous due to the sensitive nature of the confrontation.

Memoirs Of 4 Movie Producer Aarinola Odimayo: How A Nollywood Actress Stole My Script
Photos: Oluwo Pushed By Ooni’s Bodyguard For Refusing To Let Ooni Pass To His Seat