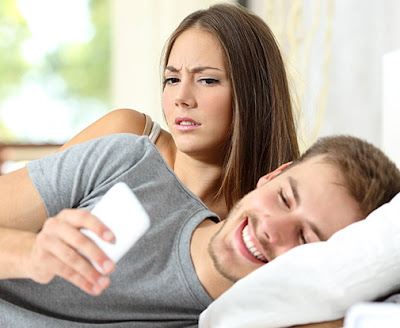 August 4, 2017 – Marriage Talk: What To Do If You Suspect Your Husband Is Having An Affair

The wife, many times, is usually the last to know when her husband is having an affair. Some of us are wired to know almost immediately, though.

And then when she finally knows, she may ignore it in the hope that it is a passing fancy and he would soon be back in her bosom.

So, how does a girl handle a cheating husband situation? You need to ask yourself certain questions, answer them and then decide whether you are shaping in or shipping out.

1. Is he really having an affair?

If you suspect your husband is having an affair, your first reaction may be to react with anger or threats. You may even feel like hitting him on the head with a pestle. Those are normal feelings. Just don’t carry them out. Cry if you must. Refuse to make love if you can still resist his six-pack but don’t do anything you are likely to regret 10 minutes later. Yeah, like smashing the windscreen of his Range Rover. My hand no dey. And before you accuse your husband of infidelity, make sure you have all the facts. Don’t rely on your tatafo friend’s conclusion that a man and woman coming out of a hotel means they are having an affair. Your semi-illiterate friend may not know anything about seminars, business lunches and meetings holding in hotels. You can’t blame her; she didn’t go to many schools.
So, make sure you are armed with proof before you go and do something rash like packing up the kids and leaving. Remember, God gave a woman intuition, not just for the mother in her, but also for the wife in her.

2. Dude, are you sleeping with your secretary?

Confront your husband, nicely. You own him as much as he owns you. Your marriage certificate is proof that you have a right to ask him if he’s having an affair or not. With evidence, no matter how small or stupid they look, tell him your suspicions and let him confirm and deny it. Don’t bottle it up and decide ‘to deal with him’. He may be innocent and even if he is guilty as charged, the conversation may be all that is needed to get the stray woman out of the picture. So, do it and get it out of the way instead of hurting inside.

Next stage is who you need to talk to because you do need to talk to someone. Don’t mind those who say you shouldn’t talk to anybody about your marriage. Until you visit another man’s farm you may not know yours is not the biggest. Your husband having an affair may look like the heaven is about to cave in until you talk to someone who has weathered that storm more than once. All you need to do is ensure you do not seek counsel from those who don’t know, those who pretend to know and self-righteous people. A cheating spouse situation can be really overwhelming but it is not as bad as you think it is. When you look back five years from now, you will see that. So, seek realistic sensible counsel. Don’t let anybody tell you to do what they won’t do themselves.

4. Can you give him another chance?

Yeah, you are reeling in pains. I can imagine you imagining his hands all over the body of his girlfriend. Your pain is worsened by the fact that the other woman is more curvaceous than you. You are 28 something and she is 34DD. His hands all over all that…, I feel you girl but you can’t wind up everything just like that. You need to decide whether you still love and want him whether he’s cheating or not. You need to be sure if you want to attempt to trust him again after this. If you ask me, I’ll say, men in these parts need second and third and even tenth chances when it comes to their roving hands and eyes. And then if you leave him, what is the possibility of the next guy coming with NAFDAC number. You see? The whole marriage business is black market.

5. Is it a merger or acquisition?

If the affair is like a 90-minute Liverpool/Arsenal match and he’s willing to leave the stadium and return home, it is easier to forgive him and move on but if he continues the affair despite all your efforts to remedy the situation, it’s time to do something about. If he has pitted a ‘Mario’ tent in the other place, you may need to do something extra. Like give him an ultimatum, move on or simply resign yourself to live with him as a housemate. If it has come to that, you might as well brace yourself up from promotion to first wife position. Once your husband continues to see the other woman after everything, it is most likely because he wants to move his headquarters somewhere else or he wants to merge his new acquisition with his older investment. What to do? Decide if you are cut out for shared prosperity or not. That is really up to you. But never ever forget the black market point.

Women can forgive the most grievous of sins. I was told that it is because of the uterus we carry around. It is extra capacity, extra space bestowed by God. But if your husband, in the process of dangling his dangling modifier all over the place, gives you gonorrhoea and didn’t tell you? Ah, you are already running temperature.

Calm down. Think it through. Will you forgive him and start wearing female condom? If his new woman calls and threatens to do all kinds of evil to get you out of the way and the following morning you fall in the bathroom and break your arm?

And then one of the children finds a scorpion under his pillow? Well, methinks that is the point where this whole set-up becomes life-threatening, a war even. If his new romance threatens your investment of many years, then it’s time to divest. Some wars just don’t make sense. Donate him to his Jezebel and run with your jewels.

Continue Reading
You may also like...
Related Topics:cheating, find, how, husband