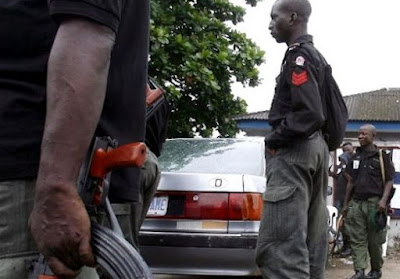 A mentally challenged man identified as Jerry Okocha on Thursday reportedly hacked to death two of his extended family members, a man and his son, at Umudei Quarters in Ogwashi- Uku Local Government Area of Delta State.

The victims are Mike Okocha and his son, Iwe. Jerry, according to sources, attacked his victims with a machete.

Mike is Jerry’s father’s elder brother while, Iwe, is 22 years old. Jerry he had killed domestic animals such as goats, fowls and rams with a machete and ate them.

It was learnt that Iwe was bathing in the bathroom when Jerry attacked him with a machete.

A neighbour, who identified himself as Ikechukwu, said besides that, there was soap on Iwe’s body and eyes.

According to Ikechukwu, Mike did not know that Jerry had killed Iwe before coming for him. He said: “Jerry went first for Iwe who was bathing.

When he saw that Iwe was dead, he left him and went for his father. Mike did not know what had happened at the backyard while he was in the living room.

Before he could jump up, Jerry had attacked him with the machete.” The machete cut the victims in the head and all over their bodies before he left them in their pool of blood.

Angry Passenger Kills Okada Rider In Akute Ogun State, Blames The Devil
Opinion: What To Do If You Suspect Your Husband Is Cheating Or Having An Affair