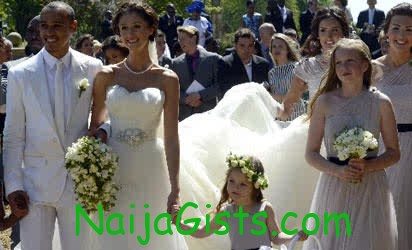 Nigeria’s West Bromwich striker Peter Osaze Odemwingie is in love and he is not hiding his feelings. naijagists.com

The Nigerian star told the Birmingham Mail that getting married to British fiancee Sarah Fallon is the best contract ‘he’s ever signed’.

Osaze, who is not part of the Super Eagles squad currently preparing for weekend’s World Cup qualifier against Namibia in Calabar, obviously because of his wedding, wore a cream-coloured suit with white shirt and tie, while Sarah had a boob tube wedding dress that looked amazing on their day of joy.

Although the former Bendel Insurance FC of Benin striker revealed he wants to move to a bigger club next season, it was with great joy that he tied the nuptials with 22 year-old Sarah whom he had been dating for two years.

“Thank you all for the congratulatory messages. It was the most beautiful day of my life! A contract I signed with the biggest joy ever!” The 30 year-old Osaze tweeted to his followers after his wedding.

Apparently the striker who is supposed to be on honeymoon in Venice, Italy still has the time to check up on social media.

The Birmingham Mail further reports that it was a nice small wedding that had 150 guests at the church.

“The ceremony was followed by a four-course wedding breakfast then “nightclub-style” entertainment with a DJ in a marquee in the grounds of the castle,’ the Birmingham Mail reported.