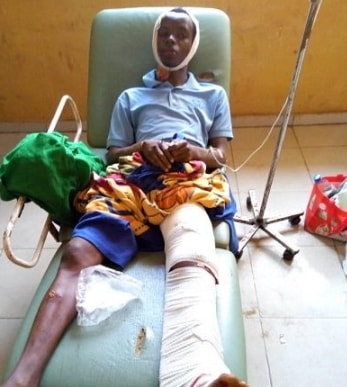 Seun Ogunmola, one of the 2 tudents of the Rufus Giwa Polytechnic, Owo (RUGIPO) in Ondo State, who had an accident while being chased by the operatives of the Special Anti-Robbery Squad (SARS) in Owo town is dead.

The late Seun died on Sunday at the Federal Medical Center in Owo, 11 days after the accident. The Nation gathered that the student gave up the ghost a few hours after he underwent a surgery on his leg.

The deceased and his classmate, Deborah Iyanuoluwa, both Accounting students of the polytechnic, were driving a Toyota Matrix saloon car when they were trailed by the SARS operatives who mistook them for suspected Internet fraudsters. It was learnt that the car belonged to the president of the hostel where the deceased resided.

According to eyewitnesses, the students lost control of the car and crashed. After the accident, the officers reportedly abandoned them and fled. The victims were rescued by bystanders, who rushed them to the Federal Medical Centre.

According to the late Seun’s friend, Dada Samuel, his condition worsened when the injury he sustained on his left leg affected his right leg, which warranted a surgery.

His friends and family members, The Nation learnt, sought financial assistance from the public in order to pay N300,000 demanded by the hospital to carry out surgery on his leg.

Dada said the late Seun’s underwent the surgery last Friday to prevent amputation of his legs. His classmates, he said, were already contributing money for another surgery when he died on Sunday.

The news of Seun’s death sparked protest by students, who called for the disbandment of SARS. The students described SARS as “official killer squad”, while they condemned a statement credited to the Force Area Commander in Owo, Friday Eboka, an Assistant Commission of Police, who allegedly said there was no proof the officers were SARS operatives.

Eboka asked students to provide “authentic evidence” to show involvement of SARS operative in the incident.

The Police Public Relations Officer, Mr Femi Joseph, could not be reached for comment.