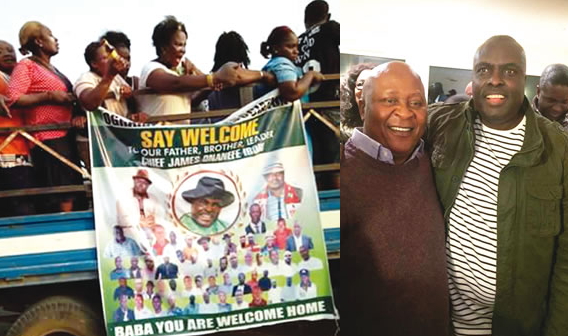 December 22, 2016 – Outrage Over The Celebration Of James Ibori’s Release From UK Prison

Today people expressed displeasure with the celebration of the release of James Ibori, a former Delta Governor, from a prison in London.

In a chat with NAN in Lagos, most people said such celebration was condemnable, unfortunate and uncalled for.

The former governor of Delta was on Wednesday released from prison in London, U.K.
Ibori was jailed in 2012, two years after he was arrested by the Interpol in Dubai, the United Arab Emirates, where he was hiding after fleeing Nigeria.

He was sentenced to 13 years in prison by Southwark Crown Court on April 17, 2012 after pleading guilty to 10-count charge of money laundering and conspiracy to defraud.

In spite of his guilty plea and conviction for corruption, his kinsmen at Oghara and other Urhobo communities in the Delta, however, turned the affair to a carnival as they lined up major streets dancing.

There was wild jubilation in Delta following the news of the release of the former governor.
A retired teacher, Mr Augustine, said it was unfortunate that some Nigerians celebrated criminals and those who contributed to the bad situation of the country.

“It’s a shame that we are celebrating those who had contributed the increased unemployment rate in the country, lack of healthcare services, dwindling standard of education and failed democracy among other challenges.

“Until we start to change our ways and mindset, we will continue to wallow in our problems in the nation,’’ Igwe said.

In his views, Mr Sesan Adeleye, a businessman, said such jubilation showed that politicians had successfully brainwashed some citizens with ill-gotten wealth.

“The problem of some Nigerians is a clear case of poverty of the mind. We value wealth so much. They are not even bothered about why he went to prison.
“They are already waiting for him to come back so that he can continue to distribute ill-gotten money to them.
“They don’t even care that the money stolen was meant for their welfare and development,’’ he said.

Also, Dr Edewede Iyamu, a private physician, told NAN that the celebration over Ibori’s release was uncalled for as he also contributed to the pervasively poor and under developed state of the Niger Delta.

“Those from Niger Delta continue to blame the Federal Government for the challenges confronting their region, whereas, people like Ibori should be held responsible. “It is sad that people from that region are now celebrating him,’’ she said.

A Lagos-based legal practitioner, Mr Adekunle Aribisala, said something must be done to stop the celebration of criminality in the country as it was becoming rampant.

Aribisala also expressed worry that it would not be easy for the Western community to release the money in question — 18 million Pounds — to the Nigerian government.

“We had the same situation when Chief Bode George and Mr Hamza Al-Mustapha were released too, now it’s Ibori. I feel really ashamed as a Nigerian.
“We do not need people like that in our society any longer. They need to be isolated so they don’t corrupt more people,’’ he said.

In her opinion, Alhaja Aishe Jelil, a civil servant, said the future of the youth who were being used by politicians called for concern.

“We seem to have lost our values in this society, I wonder what the future holds for our future generations. They are celebrating Ibori because they consider him a hero and a role model,’’ she said.