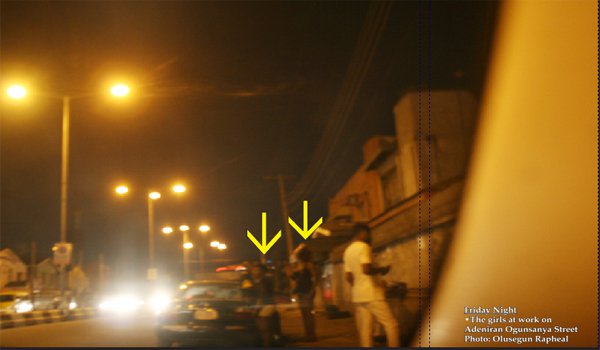 The once peaceful and enviable Adeniran Ogunsanya Street in the heart of Surulere, Lagos seems to be losing its innocence, fast.

With the recent dualisation of the road has come a proliferation of night-clubs and by implication, the sex trade. Landlords and residents fear a repercussion, which may rub-off on their children and their future.

They raised their fear with Omolara Akintoye.

It was in the wee hours on a Saturday. But not so for these half-clad ladies busy tearing at each other. They chased each other around the parking lot, shouting obscenities at the top of their voices and literally constituting nuisance in the neighbourhood. Suddenly, a guy punched one of the ladies and another threw a champagne bottle at them.

At this point, onlookers made to take sides with the ladies, and then it was pandemonium.

On another occasion, a fight broke out between a commercial sex worker and her customer. He had refused to pay the agreed price after a whole night show and the girl is not backing down. He held tightly onto his trousers and screamed all sorts of unprintables.

It was indeed an eyesore for parents, who struggled to keep their children out of eye and ear shot.

But these are some of the horrid experience residents of highbrow Adeniran Ogunsanya Street in Surulere, Lagos are now treated to on a weekly basis. Suddenly, the high street, which used to be synonymous with everything class is deteriorating into another red-light district.

Many, especially families, who live on and off the street and now fear the repercussions of such development on their children, cite the growing number of nightclubs, bars and lounges on the street as reason.

Over the years, especially since the 1.024-kilometre street was dualised and upgraded, Adeniran Ogunsanya Street has become a vital artery for innumerable flourishing businesses. Rapid and monumental increase in commercial activities as a result of conversion of residential buildings to commercial use followed, giving birth to entertainment and hospitality businesses.

But now, residents are calling on the government to step in. Adeniran Ogunsanya Landlords/Residents Association wants their peace and conducive environment back. Cheetham-West, legal adviser to the association said there is need to checkmate the activities of commercial sex workers on the street before they become uncontrollable.

Continue Reading
You may also like...
Related Topics:lagos, prostitutes, Street