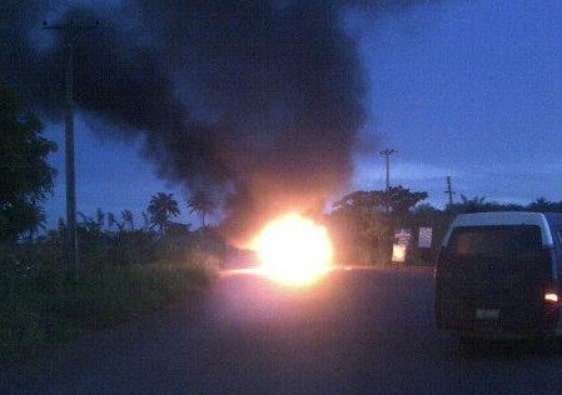 Not less than 40 bus passengers today escaped fire when a luxury reportedly exploded along the Enugu-Onitsha express way in Anambra State.

The bus belonging to one of the transport companies in the South East was said to be on its way to Lagos from Enugu when the incident occurred.

According to the Nation, the fire was ignited from an overheated tyre, which got bursted after the driver stopped to examine the bus.

An eyewitness, who identified himself as Obadiah, said the tyre of the ill-fated bus bursted when the driver stopped to check which of the tyres was faulty.

He said, “It was while he was checking the tyre that it bursted, emitting flames, which suddenly engulfed the bus.

“All passengers on board were able to leave the bus with their belongings before the fire broke out.”

He however said efforts by officials of Federal Road Safety Corps (FRSC) and other spirited individuals to put out the fire was futile as the whole bus was razed.

The Nation further learnt that the incident caused a temporary commotion along the highway as private and commercial vehicles scampered to safety.