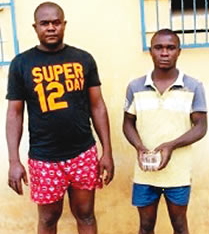 A suspected armed robber, Ugochukwu Nnaji, has said that he and other members of his gang decided to rob during the Yuletide in order to celebrate the period like the rich in the society.

Nnaji was one of the two suspects arrested by the operatives of the Imo State Police Command. The suspects specialised in trailing and dispossessing unsuspecting bank customers of their money.

Speaking with Southern City News after they were paraded by the Imo State Police Command in Owerri, Nnaji said the coming of Christmas and New Year usually reminded them that it was time to rob bank customers and enjoy like the rich within the period.

He pointed out that the money they made from menial jobs was always not enough for them to live big like wealthy people, adding that they had been in the “business” (robbing bank customers) for a long time.

“We do it in every festive period, especially Christmas and New Year to also celebrate the period lavishly like others, who have made money.

“The menial jobs we do would not make us be in line with others during the celebration,” Nnaji, who was arrested on Friday alongside his friend, Chibueze Mgboji, told newsmen.

The duo was arrested by the police after they allegedly attacked a new generation bank and carted away a huge sum of money.

Nnaji, a native of Oboro Amurie in Isu Local Government Area, and Mgboji, a native of Obudi Agwa in Oguta LGA were said to be a two-man gang that specialised in trailing and robbing bank customers in the state capital.

Briefing newsmen at the command’s headquarters, Owerri, the state Commissioner of Police, Mr. Taiwo Lakanu, confirmed that the suspects were apprehended while escaping with money stolen from a Fidelity Bank customer in Ikenegbu, Owerri.

The CP, who stated that the alarm raised by the victim attracted operatives of the police, said, “They were immediately given a hot chase and were apprehended.

“Their loot was instantly recovered as they tried to escape. The two suspects, who have confessed to the crime, will soon be charged to court.”

Lakanu noted that the criminals rode on a motorcycle, stating that the two suspects had earlier monitored another bank customer (name withheld) and snatched his bag containing N150, 000.

Lakanu said, “Immediately he came out of the bank with a bag containing money, the duo, operating on a motorcycle, waylaid him and snatched the bag.”