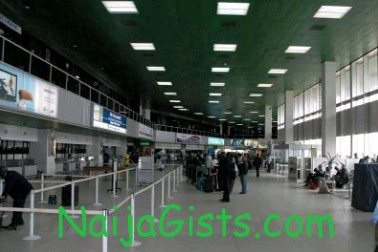 2 people suffered minor injuries while twelve luxury vehicles were damaged when hot air exhaust from a big cargo aircraft blew off the roof of a building at the E-wing of the terminal at the Murtala Muhammed Airport (MMIA) on Wednesday Dec 19, 2012.

The incident which occurred at about 7.39p.m, threw the entire terminal into confusion.

According to a staff of the Federal Airports Authority of Nigeria (FAAN) who was on duty at the terminal, there was a bang at the diplomatic car park at the time the roof fell on the cars, thus forcing some drivers to flee.

The source further disclosed that two people sustained minor injuries, while the debris of shattered windscreens littered the floor.

“We heard a loud bang and everyone initially fled. Later, some security personnel stormed the place. Thank God no life was lost. It is shocking. This sort of thing has never happened before,” he said.

On confirming the incident, the Spokesman of FAAN, Yakubu Dati said “there is no such thing that an airplane ran into cars…I’m still trying to get the real details but I think it has to do with the wind from the aircraft that blew off the roof which later hit some cars”.