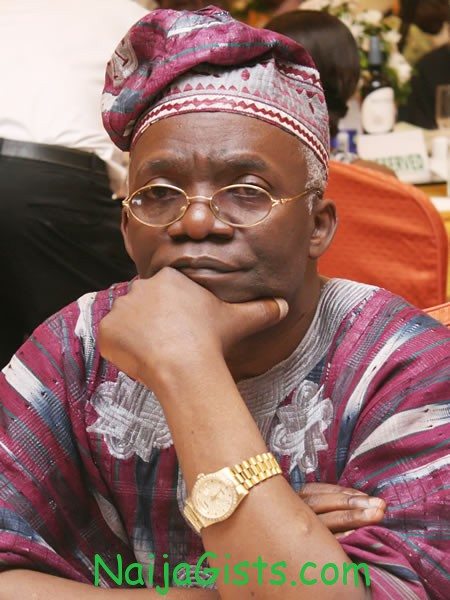 Dec 20, 2012 – Femi Falana Condemns Use Of Navy Helicopters For Shuttles

Following the crash of a naval helicopter on 15 December which led to the death of Kaduna State Governor, Patrick Ibrahim Yakowa, former National Security Adviser, Andrew Owoye Azazi and four others, Lagos lawyer and human rights activist, Mr. Femi Falana has queried the use of military helicopter for shuttle services.

In a statement he issued on the crash, Falana tasked the naval authorities to explain to Nigerians whether the crashed helicopter was designed for a shuttle service.

The human rights activist and senior advocate also accused the naval authorities of trying to subvert the report of the presidential inquiry into the crash ordered by President Goodluck Jonathan.

In his statement entitled: ‘Beyond the probe of the latest plane crash,’ Falana stated: “In a desperate bid to subvert the authority of the Commander-in-Chief of the Armed Forces, the Chief of Naval Staff, Vice Admiral Dele Ezeoba was reported to have set up a board of inquiry to investigate the remote and immediate causes of the helicopter crash.

“As if that was not enough, the Naval Chief of Training and Operations, Rear Admiral Emmanuel Ogbo has pre-empted the report of the presidential inquiry. While addressing reporters at Abuja on Monday,December, 2012, Admiral Ogbo claimed that the chopper which was acquired in 2004 was airworthy, well maintained and flown by well trained and experienced pilots.

“Since the naval authorities have claimed that the chopper was air worthy and regularly maintained, they should tell Nigerians whether it was designed for a shuttle service.

“Being a military plane, the authorities should show evidence that the Commander-in-Chief of the Armed Forces, President Goodluck Jonathan, issued a mission order through the Ministry of Defence and that an operational order was consequently issued by the Chief of Naval Staff authorising the use of the service aircraft by a political office holder on Saturday, December 15, 2012,” he stated.

While sympathising with families of the victims, Falana advised that the investigation promised by the Federal Government should be conducted in the open.

He charged the government to stop the use of official assets as if they were personal properties.

Instead, he advised the government to embark on maintenance of roads, waterways and railways.

He warned against the setting up of a new national airline by the government. Instead, he counselled government to assist private airlines and ensure that travelling by air is safe and affordable.

Falana also urged the National Human Rights Commission to ensure that families and dependants of people who lost their lives in air crashes in Nigeria are adequately given monetary compensation in line with the provisions of the Montreal Convention which has been domesticated by the Federal Government.