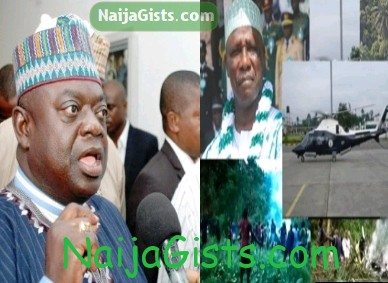 Governor Babangida Aliyu of Niger State has chided those Nigerians reported to have celebrated the death of late Governor Patrick Yakowa of Kaduna State, describing them as “inhuman.”

Aliyu made the remark while receiving the Speaker of Niger House of Assembly, Alhaji Adamu Usman who led other members of the Assembly to pay a condolence visit on him.

The News Agency of Nigeria (NAN) reports that the visit on Aliyu was with regard to his position as Chairman of the Northern Governors’ Forum.

“No matter the religion one professes, the simple tenet is that we should sympathise with the dead and the bereaved and pray for the repose of the soul of the departed whose death is a colossal loss,” the governor said.

He described as unreligious and inhuman the Nigerians reported to have through the social media rejoiced over the death of the former governor.

“Immediately we start praying for our leaders to die, then we are asking that the whole society should die. We must pray for our leaders. We must go back to our faith and practise our religion as demanded by the almighty Allah.

“We must talk to our children. We must be involved in the moral and religious education of our children. This development shows that we are failing in the duty to train our children,” Aliyu said.

He described late Yakowa as a bridge-builder who brought Muslims and Christians in Kaduna state together, saying the late governor provided peace and tranquility.

Earlier, Usman had said the legislators were impressed with the humility the late governor displayed throughout his lifetime which endeared him to a large number of Nigerians.

He said Speakers in the Northern part of the country received the news with great shock but were consoled that the deceased had left an indelible mark in the sand of times.