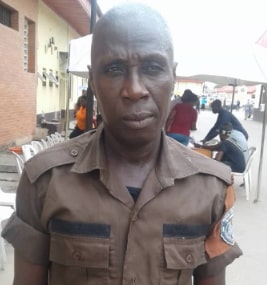 Ikuburuju Alex, a paramilitary officer attached to the Lagos State Environmental Sanitation and Special Offences Unit (Task Force) has been suspended by the Agency for alleged misconduct of enriching himself through extortion.

The said officer allegedly committed the offence at Ikorodu, where he single-handedly billed and collected the sum of N30, 000 from the owner of an impounded vehicle.

Disclosing this development in a press statement, the Agency’s spokesman, Adebayo Taofiq, said the Task Force Chairman, CSP Olayinka Egbeyemi, was irked by the officer’s gross misconduct whom, he said, took advantage of non-presence of his policemen in the area to perpetrate the act.

“On that fateful day, I was having a lecture with all my police officers at Bolade before the indicted paramilitary officer went and carried out the shady deal, knowing fully well that there would not be any police officer on ground at Ikorodu”, Egbeyemi said.

Bubble bust on the officer when the Agency stumbled on social media reports on the incident following which, investigation was conducted and found the story to be true.

According to Egbeyemi, “Investigations revealed that Ikuburuju truly negotiated and extorted the sum of N30,000 from the owner of an impounded vehicle who committed a traffic offence by plying the ‘BRT’ lane around Agric Bus-Stop in Ikorodu”, an action, he said, was disgraceful and did not justify the training, motivation as well as huge investment by the government to engender excellent performance of staff during the Agency’s operations.

“Lagos State government recently trained all paramilitary officers attached to the Agency on ‘Career Evaluation’ where they were taught how to be professional and civil in their dealings with members of the public”, Egbeyemi said, adding that the Agency would not tolerate indolence and indiscipline in any form.

The Chairman further added that any officer whose behaviour could tarnish the image of the Agency would be shown the way out.

He, however, urged members of the public to take it as an obligation to report to the any officer found misbehaving in the course of discharging his/her official duties to the Agency for appropriate sanction.