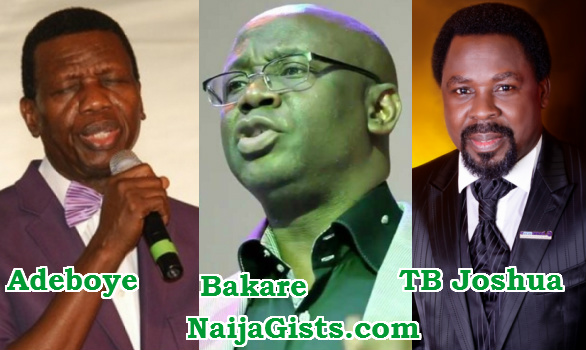 “Floods, fire and earthquakes are likely to get progressively worse until governments realise that these are part of divine judgement against those who pass unholy laws.”
“If government will repent of disdaining Christ and His church, God will help them to win the fight against terrorism.”
“A major war will be averted and that a new sexually transmitted disease will surface this year.”

The Serving Overseer of the Latter Rain Assembly, Pastor Tunde Bakare, has said that terror will increase globally in 2016.
He made the proclamation in Lagos, western Nigeria, during the Cross-Over church service to usher in the new year.
According to him, terror will increase globally because nations have rebelled against God.
Pastor Bakare, who said he has reserved his full address concerning the state of the nation till 10 January, added that there will be intense political upheavals in Nigeria this year.

“There will be large scale scarcity, shortage of food.

“As a state, country, continent, we have to go back to the farm to arrest, to alleviate the forthcoming situation”.

“I encourage the governments of all nations to invest in agriculture and to grant loans to deserving citizens to augment this effort,”

“Africa is supposed to be the breadbasket of the world. We are supposed to produce a large quantum of food for the world. This is our natural resource base. Food should be our primary export to other continents, food in exchange for technology,”

“More African countries will be under siege by terrorists because of pros and cons in choosing leaders. Mishandling of electoral processes will create a conducive atmosphere for terrorists.”
People will stop investing in politics because of “limited resources and challenges”.

“When you are genuinely called to do the job, you will do it because of your love for it and not because of money”.

“This year, do what you love. There’s money in love. Money in love brings peace and tranquility”