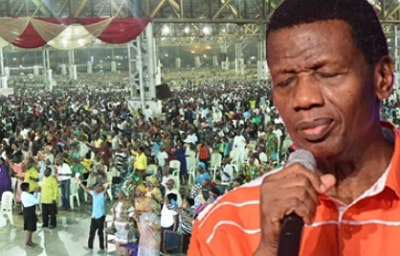 Pastor EA Adeboye, on Saturday prayed for the immediate release of all the abducted school girls still in Boko Haram captivity.

This formed part of his sermon at the church’s April 2018 Holy Ghost Service and Vigil held at its prayer ground in Mowe, Ogun State.

The monthly programme was attended by Vice President Yemi Osinbajo and his wife, Dolapo, as well as thousands of Christian faithful.

Adeboye expressed happiness at the release of 105 students of the Federal Government Science and Technical College, Dapchi, Yobe, by Boko Haram terrorists.

“We thank God for the release of the girls and pray that all the girls yet to secure their freedom should be freed,’’ he prayed.

He also offered special prayers for those afflicted by strange ailments and problems. NAN

MFM GO Daniel Olukoya: Witches Behind Massive Death & Bloodshed In Nigeria
PDP To Nigerians: Buhari Has Destroyed The Economy, Don’t Reelect Him In 2019