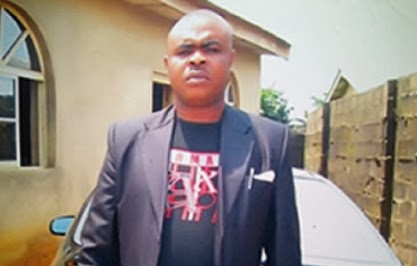 Just like any other pastor, Isaiah Willie, the founder of Happy People Bible Church located in Ayobo, Lagos was planning to preach to his congregation when he was captured.

According to police findings, the 40-year-old pastor wasn’t only a fraudster, he was also an armed robber.

The married father of 2 who is now in police custody confessed to PUNCH that he had been an armed robber for many years.

Pastor Isaiah said he was arrested some years back and later let go.

Narrating how he and others usually perpetrated bank fraud, he said, “I used to work with a group of guys who are retired bankers. One of them was even a bank manager. Most times, we would get a virgin cheque of a bank customer and the owner’s signature.

“We were able to perpetrate the fraud in Fortune Bank and African Express Bank which are both defunct now. Sometimes we, through the connivance of bank employees, used to clean out dead people’s accounts and use the money to do business. Most times, families of dead people don’t get to access their relative’s account until months or years after the person’s death.”

Willie said he was arrested by the police for his fraudulent activities but regained his freedom when his gang members secured his release.

PUNCH Metro learnt that about a year later after Willie had decided never to commit crimes, the pastor was lured back by a gang of robbers that specialised in breaking and stealing from Automated Teller Machines.

He said, “I met a man who is from my hometown, Confidence Saviour. He was wanted by the police so I told him he could live with me. A few weeks later, he told me to drop some equipment at a nearby bush and later that night, he gave me N10, 000.

“He eventually told me that he and his gang were breaking into ATMs and making a lot of money so I decided to join them. I never followed them for any operation but I usually left their operation tools -such as sledge hammer, generator and iron cutters- near the bank where they wanted to attack and I would leave.

“However, on one occasion, they went to rob at the Ayobo branch of Access Bank. Instead of dropping the equipment and collecting the usual N10, 000, I wanted more money this time around so I hid in a bush nearby. Unfortunately, the robbery did not go as planned as three policemen were killed at the scene. I was later arrested by SARS men when other gang members mentioned my name.”

The pastor who was crying in police detention said he had disappointed God. He begged police to give him another chance.

He even quoted Romans chapter 6 verse 1.

“Shall we continue in sin that grace may abound? God forbid. I know I have disappointed my congregation and I urge them not to backslide. I have been a preacher for over 10 years and I have led many people to God. My flesh was weak. I know that God will forgive me for my crime because I am genuinely sorry.” – Isaiah Willie said

Lord have mercy on us o!