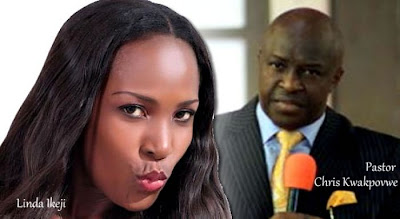 Self acclaimed self-made millionaire Nigerian blogger Linda Ikeji is yet in another scandal months after a head on fight with Pastor Chris Okotie of Household of God.

Few months back, Pastor Chris Okotie accused Linda Ikeji of trying to ruin his ministry by promoting satanic agenda through falsehood. He sent a detail warning letter to her via his publicist. If you missed the report, read it here.

As if that wasn’t enough, the self-made millionaire also got in trouble with Pastor Adeboye’s son, Leke for telling lies about his wife. Read the story here.

According to Kemi Filani and other reliable sources, ardent readers of Pastor Chris Kwakpovwe‘s daily devotional will recall that on Page 56 of the 22nd-July edition of his devotional, the pastor wrote that one Linda, a blogger and Facebook activist has been sending him several text messages, asking for an undisclosed amount of money else she would work with journalists all over the world to destroy his ministry.

Well, at first, it was easy to believe that the man of God may not have been referring to Linda Ikeji; after all, he did not actually print her full name. But with the current rebuttal on her blog just a day after her name was mentioned in the devotional, it now appears there may be some truth in the matter.

At the footnote of the page of the devotional in question, which usually contains prayer points, Pastor Chris wrote “… I received lots of text messages from one Linda a blogger/Facebook specialist, asking me to drop a certain amount of money otherwise they [sic] will work with different journalists around the world against this vision.”The prayer point then goes thus: “scatter any plan to publish any lie against this ministry! Three people have dropped dead because of this in their camp.”

In Linda’s blog post yesterday she titled Dear LIB readers; A letter from me, Linda, to you, she took out time to explain how she practically went from having nothing to becoming a millionaire all on her own accord, and then goes on to clarify some of the “rumours” peddled against her in recent times.“Now to the point of my letter. Just to clarify some things you probably have read about me: I’m not a blackmailer, never blackmailed anyone in my life, never will! I don’t have the liver to do such, plus I was raised better than that. Don’t know how anyone can stoop that low.”

This is a serious case.

The last story Linda Ikeji shared about Pastor Chris of Daily manna is likely make her a suspect;

Read what Linda shared on March 4th, 2013 about the publisher of Our Daily Manna.

“Rev Chris Kwakpovwe of Our Daily Manna Prayer Ministry recently completed a massive church in Ogudu, Lagos. Meanwhile his ex-wife has dragged him to court over adultery (when they were married)..and some other accusations. They were in court February 26th. Will bring you that gist in a bit.”

Now the Pastor is accusing Linda Ikeji of blackmail. He claims she has sent him several text messages requesting for money or she will expose him to all journalists worldwide to destroy his ministry.

This is very coincidental.

The blogger addressed this issue in an urgent manner yesterday immediately the publisher urged followers to pray against her.

Everyone is wondering why Linda Ikeji who often ignore issues like this feel an urgent need to address the issue. Could it be fear, respect for the man of God, or just a way of garnering more following on her blog as her usual tradition.

May God deliver whoever is involved in this scandal.

It is very dangerous to work against God’s servants.

Did anyone read the latest issue of Our Daily Manner devotional?