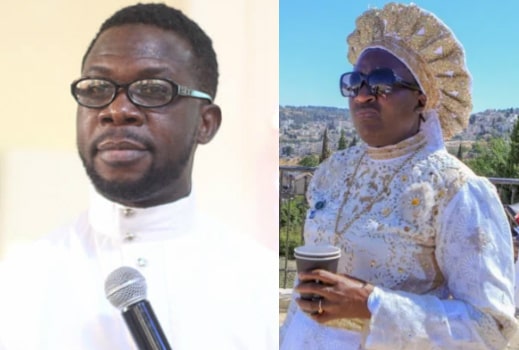 Is Pastor Israel Ogundipe Promoting Rev Esther Ajayi? Did She Gave Him N60Million?

Tongues are now wagging left right and center following the confession  of a self proclaimed church founder, Pastor Israel Ogundipe, who has been telling everyone who cares to know how the GO of Love of Christ Church in London, Madam Esther Ajayi gave him N60million to start his ministry.

The founder of  Genesis Model Parish of the Celestial Church of Christ, Israel Ogundipe, is trending with the story of  the acclaimed philanthropist Rev. Esther Ajayi, rescued him out of financial crisis.

The Cele pastor is said to have confessed that Rev. Ajayi bailed out his ministry when it was facing financial crisis, especially at the beginning when things were tough for him.

As such, Genesis, as he is fondly called, is said to have declared that he will forever be grateful to his ‘spiritual mother’, as he now calls Rev. Ajayi.

“Mama Esther Ajayi was the one who gave me a whooping N60million to acquire the land for our permanent site at Idimu part of Lagos State. As I am talking, I am in the United States of America with her touring with her and spreading the Gospel of Christ. This is not the first time. She takes me everywhere with her: UK, Europe, Asia just name it. I have gone places and met so many great and influential people through her; that has helped my destiny”, Genesis is said to have added.

He is now raising suspicions among critics of Rev Ajayi who claimed that his testimonials is promotional in nature.

Remember Madam Ajayi is still under the cloud of confusion for fleeing her church in London for Ghana over a tax evasion case.

She is currently enjoying worldwide tour with top dignitaries.

Since she left her church in Clapham London few years ago, she is yet to look back over fear of arrest.