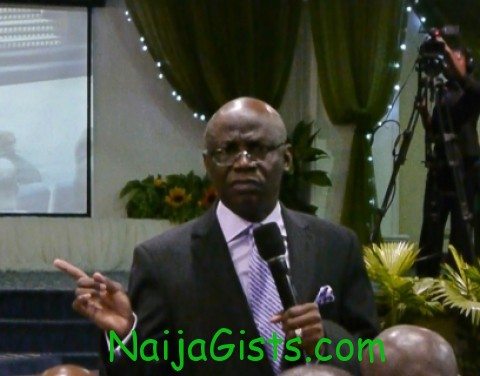 Before delivering his latest salvo in a series that began on July 22, Mr. Bakare reviewed the firestorm in cyberspace over his previous sermon titled “How to Change the Government Peacefully.” He remarked that “whether anybody likes it or not, we are not waiting for time to tell. The time is already telling.” In a fervent defense of a political bent in his recent sermons, Mr. Bakare stated, “You may say I no longer teach you Bible but politics. That’s fine. Use it, and we will have a new nation.”

He criticized the declaration of self-autonomy by the Ogoni people. Even so, he condemned the insincerity on the part of the Federal Government and the State Security Service (SSS), carpeting them for pretending to be unaware of the developments in Ogoniland.

“On the 2nd of August, Ogoni people declared their own political autonomy from Nigeria’s political landscape, and 72 hours after this declaration, the Federal Government is playing deaf and dumb. The Special Assistant to the Information Minister says they are not aware of such declaration. Whereas, I had preached a simple message on how to change government peacefully and make the society better, and within two hours the tape had landed on the table of the State
Security Department that they began to hound me the following day,” said the pastor.

Mr. Bakare’s topic for today was titled “Personal Insecurity/Inferiority Aborts Your Destiny (Part 1).” The talk lampooned Mrs. Jonathan’s recent covetous behavior, describing her as suffering from a psyche of characteristic inferiority. The activist pastor, who was a vice presidential candidate to General Muhammadu Buhari (ret.), asserted that Mrs. Jonathan’s background as a stark pauper caused her to seek “aggressive compensation.” He added that, because Nigeria’s First Lady was unsure of the reality of the provisions she currently enjoys, she wants to secure her sudden opulence at all cost, even at the detriment of public interest.

“Now I know why Jonathan’s wife has become Permanent Secretary; they are preparing her for the position of the Prime Minister of Niger Delta Republic,” quipped Mr. Bakare. He condemned the desperation with which Mrs. Jonathan seeks to be the head of all Africa’s First Ladies, a permanent secretary in Bayelsa State, as well as her possible greed for political power in a prospective Niger Delta Republic.

Mr. Bakare stated, “In the time of Awolowo, Nnamdi Azikiwe and Ahmadu Bello, they annexed
their resources to the development of their regions and there were serious competitions in each region, which in turn contributed to the federal purse. Now, it is the turn of Otuoke people, and they are declaring autonomy.”

Mr. Bakare prayed that any agenda set to balkanize the nation would fail. “We are not saying that people should not control the resources in their own regions, but they had benefited from the largesse of our unity in the past. Now, they cannot divorce when they have their own child.” He added, “It is not true that Nigeria was formed by Lord Lugard, no. The Bible says in Acts 14 that God predetermines the boundaries of all nations. He only used the hands of those in the Western world (to form Nigeria).”

The pastor’s sermon suggested that President Goodluck Jonathan’s gluttony for power and the First Lady’s actions portrayed a couple bent on executive misadventures.

“Within ten years from when he was working among the marine animals, [Mr. Jonathan] was appointed to become deputy governor, and then became acting governor. Without even thinking about it, he was appointed as vice presidential candidate and, by doctrine of necessity, he became acting president. Before he could study how to act, God factor made him President. Now, he has not even performed in 2011/2012, he is planning for 2015. His middle name is Jeroboam!” said Mr. Bakare.

In a series of declamations, Mr. Bakare asserted, “When the shoeless takes over, he does clueless things. When such men of low estate find themselves in power, terrible things begin to happen.” He added, “It is the timidity of the inferior that prods them to cover up. Deep rivers flow in majestic silence.”

In today’s sermon, Mr. Bakare narrated a reported encounter between Mr. Jonathan and Cardinal Anthony Olubunmi Okogie during a visit by the former prior to the 2011 elections. Bakare related that Mr. Jonathan had requested that the Catholic prelate pray for him to win the 2011 election. In response, the latter reportedly prophesied, “You will win, but you will not rule.”

Pastor Bakare stated that the prophecy had been realized since Mrs. Jonathan and members of a cabal had overshadowed the president (Sahara news)