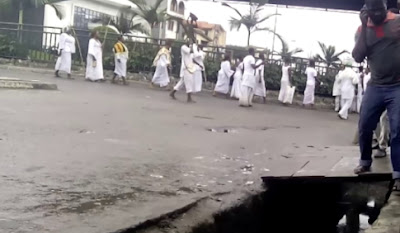 Pastors in Lagos have expressed concern over the restriction of the movement of certain persons during the celebration of the Oro festival in Ikorodu, a Lagos suburb.

Oro festival is an ancient Yoruba cultural celebration that prohibits the movement of persons, especially women, at night.

Monsignor Gabriel Osu, Director, Social Communications, Catholic Archdiocese of Lagos, condemned the act, saying that the celebration of the festival should be restricted to the midnight hours, when most persons were usually indoors.

“The Oro festival is usually celebrated at night; the celebrators should know that we are now living in modern times and that any cultural practice that is not in conformity with the mood of the times is anti-people and is not good.

“It’s high time government looks into such cultural practices because be it night or day, a festival is not designed to kill or frighten the people. It is meant to appease the gods, and should not be used against the spirit of the country’s unity,’’ Osu said.

But the spokesman, African Traditional Religion of Nigeria (AATREN), Mr Lekun Ajirotutu, however, noted that the celebration of the festival was the practice in most Yoruba towns.

“In most towns in Yoruba land, it is always in the night, not just in the night, but in the midnight hours that the festival is celebrated.

“Every town has its own traditions and the practice in the olden days was that the oracle was usually consulted whenever there was a problem in the land.

“When an unexpected thing happens, it is an unexpected sacrifice that is usually used to reverse it. That has been the tradition in Ikorodu since the ancient times,’’ he added.

The Oro festival was celebrated in Ikorodu, Lagos State, last Monday, during which females were confined indoors in the evening hours, as well as during the night.