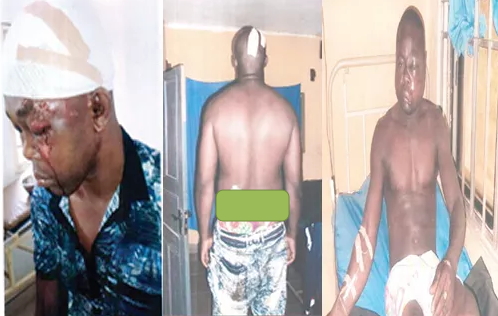 May 11, 2016 – Picture: Black Axe Cultists Attack 4 In Anambra For Refusing To Be Initiated

These 3 men and another person were brutally attacked at Ezi Umunya village in Oyi LGA of Anambra state last week for refusing to be initiated into cultism.

The victims of the ravaging cultists, Wilson Ikwuka, Anierobi Nwizu, Ike Nwnkwo and Ekene Nweke are clinging to life at the hospital.

The victims, who spoke from their hospital beds, said they were attacked because they refused to be initiated into the dreaded black axe cult group. They added that the attack was not connected to the leadership crisis rocking Ezi-Umunya village.