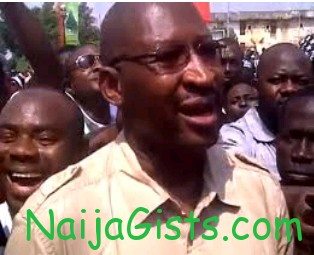 According to several online reports, following the tragic death of Kaduna state Governor Patrick Yakowa in Bayelsa state on Saturday, some youths in the state have started jubilating over his demise. naijagists.com

After the appointment of Nigeria’s Vice President Sambo, Yakowa who was his then deputy was made an automatic governor.

According to eyewitnesses, some muslim youths in Kaduna state were spotted jubilating his death because he was a Christian Governor.

Edo state law graduate, Hon. Patrick Obahiagbon popular for his bizarre use of English Language has come open to condemn their action.

“Whilst I feel tongue tied that we are witnessing another ‘air mishap’ that has taken the lives of fellow Nigerians, I am utterly shocked to hear of the jubilation in certain Northern political quarters and muslim youths in Kaduna State. Just too too cruddy and it is beyond the fugacious razzmatazz of the moment.

“I seriously call attention to the rutilanting and coruscating modus vivendi of Master Jesus the Christ and I dare pontificate that save and until we viscerally emblematize the virtues of self-immolation, quintessential abnegation, eulogizeable simplicity, humility and immerse ourselves in a platonic emotionalism of agape love and communalistic service and head to unity as one nation,”