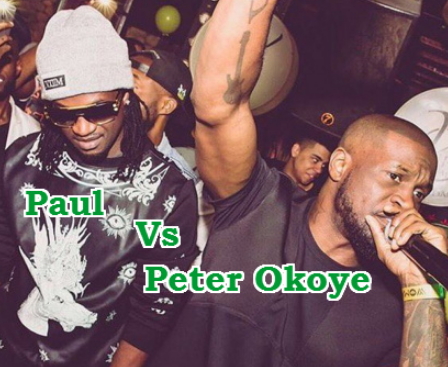 A member of the defunct duo, Psquare, Paul OKoye has begun his solo career with the track, ‘Nkenji Keke’, and is said to be presently working on a new jam.

However, it seems the new track does not go down well with the singer’s fans as he has been asked to give them something hotter than the last.

One of his fans poshmimi01Mylove, stated, “@rudeboypsquare please we need something hotter and better that the one you just came out with. Just try harder and shame the bad belle dem; try as much as you can to convert the unbelievers okay. One love man.”

It is still held in some quarters that the artiste was the voice of the group. Notwithstanding Paul, who now goes by the name Rudeboy, and is co-producing with Lord Sky, is seen in the studio with his writing pad and is expected to nail it.

His twin brother and former band mate, Peter Okoye’s new single, ‘Cool It Down’, is still getting accolades.

The Music Producer has also revealed that they have recorded a couple of tunes with the artiste and is expected to be coming out soon.

With argument still ongoing on the separation of the duo, a fan tries to explain the stand of Paul on the issue, saying he has assured them, that the group will not die, while others believe none of the duo can sound like P-Square individually.

mercymessi9250@o.zon9 wrote; “But Paul never renounced P-Square na. It was Peter that left on his own, and Paul promise fans everything is going to be alright that P-Square will not die…so wat exactly are you talking about?.

Joselyn Dumas: Why I Quit My Legal Job In The US & Relocated To Ghana
Adesua Etomi And Banky W Seal Marriage With Church Wedding In Cape Town South Africa Today