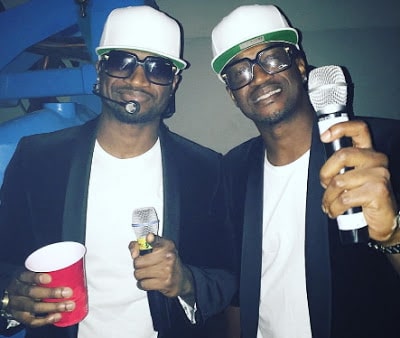 Peter Okoye was formerly a member of the disbanded group known as P-Square. This group was made up of just two people himself that is Peter Okoye and his twin brother Paul Okoye.

However since he went solo, this musician began referring to himself as Mr.P and this is his new stage name.

Peter Okoye is from the South Eastern part of Nigeria. He was born of 18th November 1981, a birthday which he shares with his brother as they are twins. It is almost impossible to talk about Peter Okoye without also talking about his brother Paul Okoye because their stories have been intertwined practically from birth.

As a team, Peter and Paul discovered a love and talent for music and dance. From this point, whilst singing and dancing to other people’s songs, the duo gradually developed their talent.

Peter and Paul Okoye are said to have been greatly inspired by the legendary god of music, Michael Jackson. These twins teamed up with three other people to form a music group and this group delighted the people of Jos with their singing and dance performances.

The discovery of this remarkable talent in music and dance choreography prompted these brothers to attend a school of music to gain more skill in music and master the act of playing various musical instruments. After this, albeit strange, they both went ahead to study Business Administration at the University of Abuja.

Their previously formed band gradually lost it members mostly to distance, eventually leaving just Peter and Paul. As they were both in the same location, these two decided to form a group of their own. From then on, this duo began their rise to the top. Their group underwent a series of name changes before finally deciding on the name P-Square which they were known by until their separation.

Their win from a competition known as the Grab Da Mic helped finance the release of P-Square’s first album. The album was called Last Nite and it won them a nomination at the Kora Awards.

In 2003, the group won its first award for the Best R&B Group from Amen Awards. Their second album was released in 2005. This album Get Squared was a worldwide hit and it earned them the place of number 1 on the MTV Base chart, a position which they occupied steadily for an extended period of four weeks.

Their third album hit the market in 2007 and beat the previously released one making it their highest sold album yet. In 2009, P-Square’s fourth album followed and on they went.

Their career sailed smoothly until news of cracks in the duos relationship began making the news in 2016. Things went downhill from there, culminating in their eventual split after a great many fights and drama.

Peter Okoye was in a seven year relationship with Titilola Loretta Omotayo and this relationship eventually led to marriage in 2013. His marriage to this lady was said to be one of the many issues which bred disagreement amongst the brothers.

It was reported that the mother of the Okoye brothers did not approve of Peter’s choice of a relationship partner and marrying her was a dishonor to the wishes of their mother, who had passed away the year prior to Peter’s wedding.

These problems did not stop the couple from having a grand wedding ceremony which was graced by well-known celebrities and media personalities. Peter Okoye has two children Aliona and Cameron Okoye.

An official album is yet to be released by Mr. P but he has released a number of singles. Some tracks include: Too Late, Wokie Wokie and One More Night.

Other than his twin brother Paul, there has been a mention of an older brother who was once their manager he is called Jude Okoye. There is also mention of a sister called Mary Okoye who is said to have wedded sometime in 2014. Besides these three previously mentioned, Peter Okoye reportedly has four other siblings whose names are not really known to the public.

Together as a team, P-Square’s net worth was said to have been unrivaled. However, the loss of several valuable joint assets in the course of their split has caused a drop. Peter Okoye is currently reported to be worth a little over N 5.8 billion.

Peter Okoye can be reached on Instagram through the address Mr.P(@PeterPsquare). He has over 8 million followers.

Who Is The Senior Among Peter And Paul Okoye

Sure they are twins and they share the same birthday but Peter Okoye/ Mr. P is the older one of the twins.

P-Square Reunion 2020: Will P-Square Brothers Peter & Paul Okoye Ever Come Back Together
Nigerian Nollywood Actors Who Are Rumoured Cultists