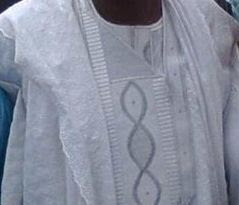 PDP Chairman in Ipokia local government area of Ogun state, Alhaji Saruku Suraju popularly known as “Aro Meta” has died in a hotel after a fling with a woman.
He died at the De Lover Hotel, located at Aseko area, Ibatefin in Ipokia on Friday night.

Our correspondent reliably gathered that the deceased and his mistress, who has since fled, were together at the hotel.

The 68-year old man until is death was the PDP Chairman in Ipokia local government area.
We reliably gathered that ‘Aro Meta’ was among those to be conferred with Islamic chieftaincy titles today at Ibatefin Central Mosque.

He was to be turbaned as Giwa Adinni of Ibatefin Central Mosque, but the ceremony has now been postponed indefinitely.

A family source, who confided in our correspondent confirmed that the man died in a hotel while his mistress, who no one knows fled without any trace.
“The incident happened around 9:00pm on Friday and we have buried him yesterday according to Islamic rite.

Confirming the report, the source said: “Yes, he died at De Lover hotel. What I know was that, his party, PDP is to have the final meeting of those to be elected as officers of the party in their forthcoming Congress.

“He was on his way to the meeting when they said, a lady called him on his phone and asked him to join her at the hotel. It was his dead body that was later taken out from the hotel with series of information flying around.

According to the family source, “Some said he might have contracted thunderbolt, “Magun”, a charm laid for partners who are adulterous.

“Some people said he was strangled to death by unknown people while some said he was killed by a chemical substance sniffed into his nose with an handkerchief. What all these means is that, it has a political undertone.

“We were told that he had a misunderstanding with someone in the party over the chairmanship seat as he wanted to return to the office while other candidates are interested.

“I was not there, all these are what people are saying. I don’t want to speak ill about the dead, he was there all alone now. This is a big lesson for everybody, please, spare me to stop here, I don’t want to say more than this”, the source revealed.

Our correspondent further gathered that the deceased has three wives but two have left him while the third wife, an Ajase from Benin Republic was attacked by partial stroke and has since been taken back to her relatives in Ajase town.

Prior his death, he was living alone with no wife.

A source from Ibatefin Central Mosque also confirmed that all arrangements for the turbaning ceremony, earlier fixed for today have been put on hold due to the sudden death of one of the chiefs to be turbaned.

The source informed us that his death still remains a shock to everybody, saying that, a lot of information is going round surrounding his death.

The deceased, according to a close relative, was the only child of his parent.
The relative pointed out that his mother is still alive.

He was buried yesterday, according to Islamic rites at his residence, Oja ale area, beside Apostolic Church, Ibatefin, near Agosasa, Ogun state.