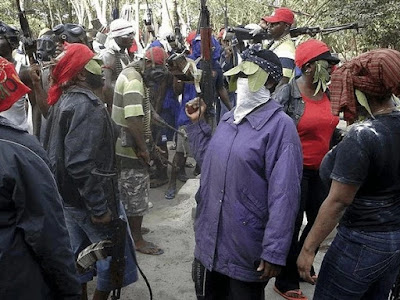 The South-South chapter of the All Progressives Congress, APC, has accused the opposition Peoples Democratic Party, PDP, of sponsoring the new militant group bombing oil and gas installations in the country, the Niger Delta Avengers.

The party made the allegation at the end of a meeting held in Benin City, Edo State.
APC described the resurgence of militancy in the Niger Delta region as a ploy to frustrate and derail President Muhammadu Buhari’s administration.

“The zone is cocksure that the nefarious and ruinous activities of the ‘Avengers’ are not driven by any patriotic and altruistic impulse”, the APC said in a communiqué issued at the end of the meeting.

“We have compelling reasons to strongly assert that these activities are sponsored and instigated by the opposition PDP to derail and frustrate the APC government of President Muhammadu Buhari because of its determination to fight against corruption, stabilise and put our country on the path of sustainable development”.

The communiqué, signed by the APC National Vice-Chairman South South, Prince Hilliard Eta, and the Zonal Secretary, Steven Ezekwem, also faulted the inclusion of the Niger Delta region in the “imaginary State of Biafra”.

The party, which described the inclusion as “dubious”, said, “Niger Delta is not, cannot and will never be part of Biafra”.

The party also commended President Buhari and the APC-led federal government for the courage to commence the clean-up of Ogoniland and other parts of Niger Delta.

The South South APC further called on the federal government to reconstitute the Board of the Niger Delta Development Commission, NDDC, to reflect and accommodate all the constituent states of the region, as well as carry along the party leaders from the zone in appointments into federal boards and other executive positions.