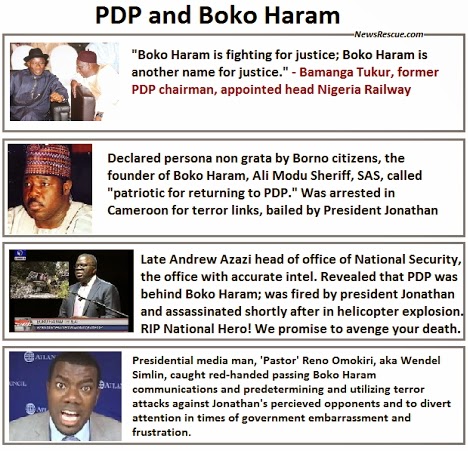 Marilyn Ogar, the Department of State Services, SSS spokesperson recently suggested to Nigerians that there were links between the APC opposition party and Boko Haram events. The APC has promised to sue. The ‘evidence’ presented by Mrs Ogar can best be described to have been built on weak associations of a handful of select events among hundreds of other left-out events with other associations with the ruling political party, PDP and perhaps any other party, social group, event or person.

Furthermore, the unprofessional public release by her was recognizably absolutely un-statistical. In statistical terms, if statistical analysis was applied to the handful of selected items, the P value would be above 0.05, meaning that these events were suggestive will be ruled out.

Additionally, were a P value of less than 0.05 to be miraculously obtained when all events left out were inputted, the association of events to results will still be merely correlative and at best attributional, but not implicative. Intelligence gathering and analysis does not rely on and prioritize such weak and mostly useless methods.

The point of the above assertions is the unfortunate fact that Marilyn Ogar was totally unprofessional in her conduct and in so doing put the nation at greater harm of terror. A second important point to note is that, if this was the best methods the SSS used in investigation – by un-statistical accusation and no proper investigation, analysis, interrogation, information-tapping, spying, and other modest techniques, it puts into serious question the entire apparatus Nigeria relies on in security provision and terror prevention. It clearly explains the results for the past 5 years and the incremental capacity and success of Boko Haram terror and southern Nigeria, Niger Delta high sea piracy, vandalism oil bunkering and related criminality.

We are pleased that the SSS is ready to update the public on the current status of terror in Nigeria. We would therefore, on behalf of the Nigerian people seek this opportunity to press Marilyn Ogar for the more serious questions with actual evidence that plague the minds of every day Nigerians. We would appreciate her detailed responses to these select questions.

1. What is the true detail and scope of evidence late general Andrew Owoeye Azazi and the SSS had at the time he revealed that Boko Haram was developed by the ruling PDP political party?

3, Why was an investigation into the true events of death of late president Musa Yar’Adua blocked by the Goodluck Jonathan administration? Is there any plan to re-establish this investigation in lieu of recent revealed classified documents including purported statements of Professor Ukandi G. Damachi alleging that though sick at the time, late President Musa Yar’Adua discussed having been poisoned by his predecessor, Obasanjo’s kitchen staff and his subsequently fired these staff due to this suspicion? Could a sick Nigerian president have possibly been conveniently poisoned to speed his death, block his critical party, and national policy reviews and his anti-cabal corruption proceedings and enable the transfer of power to President Goodluck Jonathan? Is there need to investigate this for national security?

4. What are the details in the Abba Moro White paper report that link the person of Ali Modu Sheriff a close friend of President Goodluck Jonathan and a ruling party political member with the evolution of Ecomog and Boko Haram?

5. What are the links of Vice president Namadi Sambo with the Boko Haram terrorist group as asserted by the state security department which you represent? What has been done about these links?

7. What is the result of the investigation into the links between the current Minister of defense, Spy Aliyu Mohammed Gusau and the cache of terror arms found in a bunker in Kano as your department members revealed?

8. What is your department’s exp0lanation to the utility of Nigerian army tanks and APC carriers by Boko Haram terrorists? These tanks can be seen behind ‘Shekau’ in all his video releases. Why has the military under this administration taken Nigerian military vehicles up north to supply them to Boko Haram to assist the terror group in its genocide on the farmers in the north?

9. Why has your department in five years not made the arrest of a single sponsor of Boko haram?

10. Who are those the president of Nigeria described as knowing and eating with that he promised to soon reveal as sponsors of the deadly sect? Why does your department allow these sponsors remain free while they pay for the death of thousands of Nigerians and expand the Boko Haram threat to the nation’s neighbors?

11. Why did the president of Nigeria, Goodluck Ebele Jonathan reflexly cover-up for MEND when they claimed the Abuja bombing, and what was behind his so rapidly first inventing the “Boko Haram as an opposition tool” spin within his pre-election campaign of 2011 that remained the essential utility of Boko Haram anti-north Nigeria terror for the rest 5 years of his governance? Can your department now present the evidence if any that the President had at the time that he used to exonerate MEND of the Boko Haram attack in Abuja?

12. After five years of this administration, what are your department’s final findings on Boko Haram terror? Is your recent ‘submission’ the best and ultimate you have thus far to assure Nigerians? What are your plans to accost the terrorists and their sponsors? What are your plans to inhibit their finances? Are you tracing the links between the stolen $20+ billion oil revenue and terror? Simply put, what’s been done and what is next as pertains to Boko Haram? The public can infer and accuse; we believe your job is to actually arrest. Have you? Can you? When will you? It has been five years now and 15 years thus far under this ruling party with all forms of terror increasing in Nigeria, Nigerians are anxious to know what concrete steps your department will ever take or if Nigeria is destined to remain the worst terrorized nation on plant earth.

13. And finally, can you debunk the publicly recognized link between your recent release and that of Reno Omokri, presidential media spokesman who goes under the Boko Haram alias of Wendel Simlin?

We appreciate your prompt responses to this first set of questions and we trust in the ability of your department to reveal the truth behind Boko Harm to the Nigerian public with numbers, details and evidence.