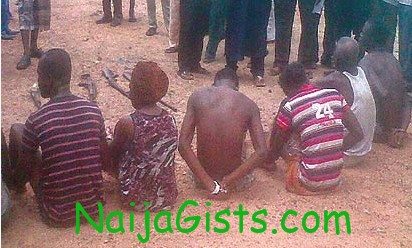 Kogi State’s Police in collaboration with their counterparts in Edo State, recently recorded a breakthrough by rounding up a gang of vicious criminals that surreptitiously succeeded in penetrating the anti-crime vigilante group in the area called Peace Committee Services.

At the end of what they tagged ‘a robust intelligence surveillance that yielded positive dividends,’a popular member of the committee in the Central Senatorial axis of Okene identified as Ahmed Ojapa, a.k.a. Ojo all over, and four other suspects who were allegedly involved in the brutal murder of a popular musician in the area, Momoh Diyo Yusuf, were arrested.

Police sources said the gang was also responsibly for other heinous crimes committed in the state in the recent past.

Giving details of how they ended up in police net,Police sources said, “On Tuesday, May 9, Ahmed Ojapa and his colleagues waylaid one Momoh Jimoh Diyo Yusuf who was a popular Musician in the area, killing him.  They also made away with his Honda Odyssey car along with two other vehicles from other unfortunate victims and proceeded to attack Bank PHB and Igara Police Station, a border town between Edo and Kogi States.

Crime Alert learnt that the musician, MomohJimoh Yusuf, who was returning from a social rally in the day,met his untimely end in the hands of members of the Peace-vigilante groups turned robbers.  He reportedly ran into the gang as they were carrying out an operation and, apparently because he has seen their faces and could identify them, the gang pumped hot leads of bullet into his body after which they dragged him out of his vehicle amidst their victim’s passionate plea for mercy which went unheeded. They reportedly dumped the body beside a bush and fled from the scene.

However, their evil deed was exposed as people of the area did not view the victim as not only a musician but a political commentator that speaks on behalf of the poor masses. Piqued by his gory death, they must have apparently embarked on fasting and prayers to expose his killer.

Luckily, their prayer was answered few weeks later as the Police in Kogi State swung into action.  In what Kogi State Commissioner of Police,Mohamed Kastina described as ‘a robust intelligence surveillance that yielded good result’, suspected perpetrators of the crime were arrested.

Investigation by the state police force revealed patently that, Ahmed Ojape has allegedly been taking advantage of his being a member of peace-vigilante group in Otutuwa ward, Okene to commit crime as he and his members were said to have confessed to other crimes; notably the attack on UBA branch of Ajaokuta and the razing of Ajaokuta Area Commander’s Office in January.

Though some of the gang members are still at large, the police command however arrested four other suspects along with Ahmed. They are, Hassan Anikwale, Yaya Mohammed a.k.a. Egg, Abdulrahab Dada Ogehe and Mallam Aliyu Raji Ayo; all are members of the peace Committee.

Confirming the arrest of the notorious criminals, the State Police boss, Mohammed Katsina assured of the command’s efforts at nipping the incessant crime in the area in the bud stating that the police force are now battle ready to combat crime and criminal tendencies in the state.  He also said the command will work with the INTERPOL in the arrest of some of the fleeing robbers linked with the Ankpa bank robbery of February (culled from Vanguard).