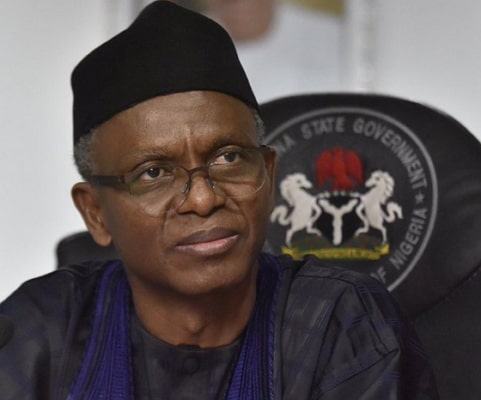 Religious Intolerance & Persecution Of Christians In Northern Nigeria: Why Governor El Rufai Must Be Voted Out

“Even if Pope is my running mate, Christians won’t vote for me…” –Governor El-Rufai, Punch Newspaper, Jan 17, 2019

Analysts have argued that the above line attributed to the Kaduna State governor, apart from being disrespectful of the sensitivity of Christians, is also, to a large extent, a proof that religious intolerance travels in one direction in Nigeria as it is elsewhere.

Before I explain why I agree with this line of thought, let me quickly point out that the Pope is the head of Roman Catholic Church. And just so you know, the Catholic Church is the largest Christian church, with approximately 1.4 billion baptised members worldwide as of 2016. As the world’s “oldest continuously functioning international institution” it has played a prominent role in the history and development of Western civilisation in particular and this planet in general. It has influenced philosophy, culture, science, art and so on.

Catholics live all over the world, and since the dawn of civilization, no one or any organisation, not even Islam, has achieved what the church has, in terms of charitable works. Yet, it is the head of this same church that the governor of an impoverished northern Nigerian state chose to use as an example in a statement aimed at showing the ‘division’ in his state.

That said, apart from being someone who many have described as a fundamentalist Muslim, Governor El Rufai, on a number of occasions, have displayed insolence for the Christian faith in ways that Christian leaders cannot even dare with respect to Islam.

For example, on January 28, 2014, he tweeted: “if Jesus criticises Jonathan’s government, Maku, Abati or Okupe will say that he slept with Mary Magdalene”. The tweet came as a shock to many Christians, and in response, the Christian Association of Nigeria CAN, while praising the “maturity and dignified restraint of the Christian populace, in the face of inflammatory and provocative statements…” advised them not to “…allow him to turn Nigeria into a cauldron of fire by his reckless, bigoted and twisted commentaries about our Lord or our faith…”.

Truth is, many Nigerians are yet to understand the one-sided nature of religious intolerance and persecution in Nigeria in particular and in the world in general.

Imagine a southern Christian governor saying “Even if Mohammad is my running mate, Muslims won’t vote for me…” what would the response be? A few examples would give you an answer.

In 2001, Nigeria’s Agbani Dariego won the Miss World contest. The international body then decided to move the 2002 pageant to Nigeria. During preparations for the occasion, a journalist by the name Isioma Daniel, in a bid to show the wide acceptance that she hoped the competition should enjoy, wrote that the Islamic prophet would probably have chosen a wife from one of the contestants.

In this same Kaduna where El Rufai presides today, a bloody riot, led by Muslims extremists, ensued and claimed over 200 lives. As I write, none of the perpetrators of those killings have been prosecuted.

Even though ThisDay, inundated with telephone calls from furious Muslims, blamed, stripped the writer of all her responsibilities, published a retraction on its front page and apologised, the Muslims did not stop the riots and killings. In fact, ThisDay office in Kaduna was sacked and burned to the ground by “four busloads” of Muslim fanatics.

In fact, when they attacked where the Christians lived, they also slaughtered two Muslims students, people who fiercely denied being Christians, but were killed by accident simply because they were wearing T-shirts rather than traditional Islamic clothing!

Daniel fled to neighbouring Benin Republic. Despite all her travail, Islamic clerics from Zamfara State Nigeria, issued a fatwa against the journalist her “for insulting the prophet” and the deputy governor Mr Shinkafi declared that “Like Salman Rushdie, the blood of Isioma Daniel can be shed. It is binding on all Muslims wherever they are to consider the killing of the writer as a religious duty.”

A point worthy of note is that, when non Muslims say or do things that Muslims consider offensive, like the Danish cartoonists, they won’t give thought to whether the ‘culprit’ was Christian or not, they just assume they were and begin to kill Christians and burn churches.

Countless examples like Daniel’s story throws up the question of why Muslims, call them extremists if you like, are so intolerant of non-Muslims and their feelings? It’s ok to insult Jesus and Christianity, in fact, everyday; we see insultive and derisive comments from Islamic quarters, but it not ok for Christians/non Muslims to even belch a word ‘against’ Islam even in his bedrooms, even if it was in exercise of their fundamental right to free speech.

Sadly, the Muslim world is in total turmoil to begin to answer the question how much more to proffer a solution.

Why is it so hard for people to see that Islam has another side, the political side, that it would only allow non-Muslims a status called “dhimmitude,” roughly meaning political and societal inferiority, even in their own lands? This is one of the reasons why, they, like the governor, can say what they like, and the rest of us can’t.

All over the world, as I will show with a few examples here, there has been documentation of crimes against non-Muslims; yet, we hear political leaders and some claiming these heinous crimes against people and property are not Islamic, and that Islam is a religion of peace. But is it true? Why can’t we allow Muslims themselves, by their own example, to prove to us what their religion really is, and deal with it as such?

There experts who have argued that intolerant treatment of non-Muslims is embedded in the Koran, and that some of the peaceful Koranic verses are a ruse. They argue that theologically these verses have been annulled by the bellicose verses written later, in particular those of Sura 4.

They say despite the fact that Muslims and their allies would have us believe that Islamic almsgiving is a philanthropic requirement that demonstrates the humane and peaceful spirit of Islam, that the reality is very different.

Zakat, they say, concerns only the umma, the community of Muslim believers. That a Muslim is, for example, by no means held responsible for giving alms to impoverished non Muslims, nor to succour them in any way. As for acts of charity toward the pagan or the atheist, they are deemed blasphemous in Islam. Charity is not based on commiseration or love of one’s neighbour but based on two considerations: first, to practice solidarity toward indigent members of the umma, in order to foster cohesion within the community; second, to teach any Muslim that he is not the real owner of the goods at his disposal, which are merely a loan authorized by Allah in order to illustrate his power and to spread Islam everywhere.

Of course there will always be an exception to all these, but the truth is, Muslims tend to see themselves as superior to other human beings, even to their host where they are strangers, and this, to a large extent, explains their disrespect, except we want to deny the obvious.

Many Muslim countries absolutely proscribe the construction of churches in their territory. Christian worship is prohibited to foreigners, even though there is a mosque right where the Pope lives. In the majority of Muslim countries, the entry or residence of Christian priests is almost impossible; any proselytism is prohibited, under penalty of immediate expulsion.

In Europe for example, Muslim proselytism is encouraged and financed through the construction of mosques by the authorities. The rule of reciprocity that governs international law is completely scorned and the world readily accepts this double-standard, which in the eyes of Muslims betrays a sign of weakness and resignation that encourages and legitimates, as though justified by divine will, their attitude to non-Muslims in their own lands.

An Egyptian Imam in the Cairo newspaper Al Ahram explains the naivity of the world in the following word: “Europeans know that they are in error, they recognize the superiority of Islam and the superiority of Allah; they prostrate themselves before us and acknowledge themselves to be Infidels, and thus it is just that they should become a land for our conquest.”

Even in the Islamic doctrine and texts themselves, we see words like “God’s curse be upon the infidels!…” Quran 2:89-2:90

“I shall cast terror into the hearts of the infidels. Strike off their heads, strike off the very tips of their fingers.” Quran 8:12

“Believers, make war on the infidels who dwell around you. Deal firmly with them. Know that God is with the righteous.” Quran 9:123

“Believers, take neither the Jews nor the Christians for your friends. They are friends with one another…” Quran 5:51

Can anyone deny that verses like these, whether interpreted rightly or wrongly, are some of the motivations for the types of disrespect and atrocities being perpetrated in Islamic lands?

For example, one of the goals of Al Shabab is to rid all of Somalia of Christians.

As we speak, since the fall of Saddam Hussein in Iraq, Christians and other minorities have been forced to convert, pay a punitive historical tax or get killed.

An estimated 900, 000 Christians have been reported to have fled Syria since the start of their civil war in 2011, despite the fact that Christians are often abducted and killed.

As we speak, there are very few Christians in Afghanistan, where their religion is seen as a western religion. And they must keep their religion secret or risks being rejected by their families of even get killed. Even foreigners are not spared.

The blasphemy law which only applies when non Muslims speak ‘against’ Islam, which reigns supreme in all Islamic lands, is also very strong in Sudan where, on the basis of it, countless non-Muslims have been killed or sent to prison.

In Iran, after the Islamic conquest, all Persian religions where obliterated, and as we speak, any ethnic Persian who converts to Christianity are considered an apostate. Armenian and Assyrian Christians who live there and are allowed to practice their religion are treated as second class citizens. Churches are often raided and church leaders arrested by government.

It is only a callous person that would deny that since Boko Haram came to prominence in Nigeria, added to the Fulani herdsmen, thousand of Christians have not been killed and many more displaced.

Then Saudi Arabia is the worse where conversion from Islam is punishable by death, where the holy bible is outlawed. Where Mecca, Medina close to Christians/non-Muslims, and in fact they want to do the same with Jerusalem, the so called ‘third holiest place in Islam’ which is why they insist on taking the city.

From Pakistan to the Maldives, Iraq to Egypt, and where ever you have Muslims majority, the story is the same.

Looking at the history of religious violence brought about by unguarded statements should the governor, not for the first time, say such, especially in the eve of election?

The people of Kaduna as well of Nigeria in general, owe it a duty to vote out the likes of this governor come February 2019.

He lives in Abuja FCT, Nigeria.