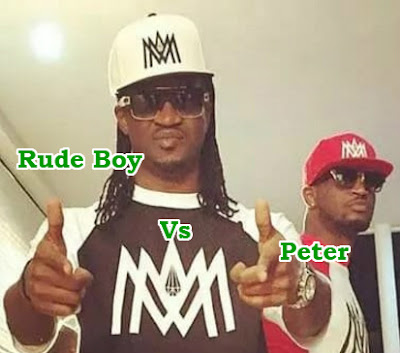 The ongoing family war between Paul and Peter Okoye won’t end anytime soon, as the duo have sent words to each other on social media.

On Friday, Paul took to Twitter to shade his brother who is performing in America.

He wrote, “Pls guys stop tagging me in any beer parlor or restaurants appearance in America…. am in Nigeria.”

Peter, while responding on Instagram asked his brother to move on, instead of throwing shades and being bitter.

He added that he is not in any competition with him and has already called himself an upcoming artiste.

“Pls enough of the shades my brother I have moved on. I have even called my self an up coming artiste. You are the song write and the voice of Psquare, the every every! No wahala pls allow me to have my peace showcase my self to the world and Enjoy with my family. And I am expecting you to do the same.

It is not a competition and it is not healthy. My brother I have moved on. I am very sure we will definitely do songs again in future and I wish you all the best bro. Nothing but love God bless Psquare and the great Fans, God bless Mr P and God bless Rudeboy. #Peace”

Recall that Peter had earlier written to their lawyer, seeking the termination of the Psquare contract.

He had accused their elder brother, Jude of threatening to kill him and his wife. Peter also released a video where Jude was making the threat.