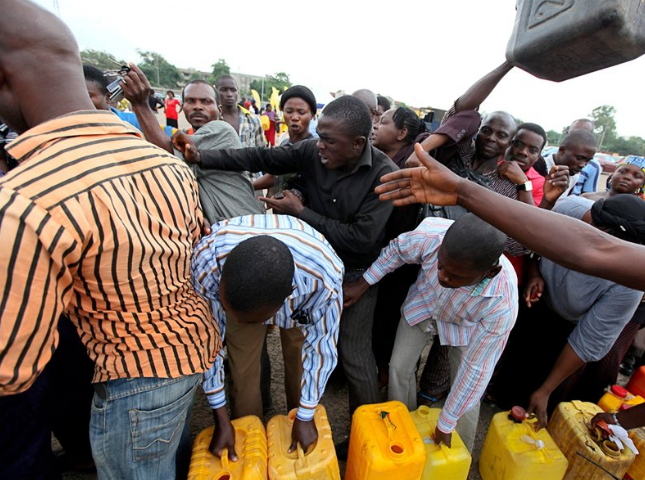 May 17, 2017 – Oil Scarcity Hits Ekiti As NUPENG Stops Oil Marketers From Supplying Petrol To State Because Of Fayose

Oil sector stakeholders have stopped the supply of Petrol to Ekiti State because of Governor Ayodele Fayose.

The National Union of Petroleum and Natural Gas Workers (NUPENG), Independent Petroleum Marketers Association of Nigeria (IPMAN) and Petroleum Tanker Drivers (PTD) are angry over a case instituted against two of the unions by Governor Ayo Fayose.

A source said the governor accused IPMAN and NUPENG of “economic sabotage” in a face-off with oil marketers in March.

Although the case was reportedly withdrawn last Friday, the national unions of the three bodies are enraged that the government could take such an action after a peace meeting.

Marketers are angry that the governor took the action after the intervention of Petroleum Dealers Association of Nigeria (PEDAN), following a strike in protest against demolition of filling stations.
Petrol scarcity is affecting commercial activities, especially in Ado-Ekiti.

Commuters were yesterday stranded at bus stops. There were long queues at filling stations.
Black marketers capitalised on the situation to exploit the public. Transport fares have increased.

A marketer, who preferred anonymity, said: “After the visit of PEDAN in Southwest, Governor Fayose said everything has been resolved, but we were shocked that he sued IPMAN and NUPENG, accusing them of sabotage.

“Filling stations were destroyed in Ado and Igede. The owner of Igede Filling Station was arraigned and remanded with six of his kinsmen by the government.

“The unions are aggrieved that their peaceful efforts have been thwarted. They are disappointed at the actions taken by the governor after the parley.

“What is happening in Ekiti State is beyond the local marketers. The national unions have ordered the suspension of fuel supply to the state.

“The implication is that any marketer who smuggles the product to Ekiti will be suspended for six months and fined N1.2 million.”

“We are being victimised by the Fayose administration. This, unfortunately, is happening in the week Gen. Adeyinka Adebayo will be buried.

“I pity consumers, motorists, motorcyclists and passengers.
“As we speak, I have three trucks in the depot, but they cannot come to Ekiti because of the order.

“My colleagues’ trucks are stranded in Itawure and Akure because they cannot enter Ado-Ekiti.
“Although the government has withdrawn the case, a letter to that effect arrived the national headquarters of the unions late.

“We need an apology letter from the government because we are aggrieved about the case, which we believe was withdrawn because of Adebayo’s burial.

“Those of us selling fuel are the ones still having a few consignments. The moment we exhaust them, that is the end. The state will experience crisis.”