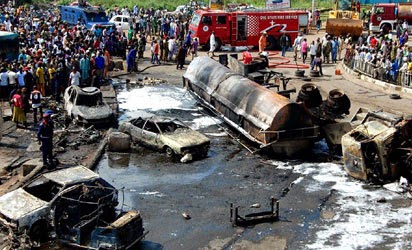 The death toll of the tragedy that struck at the popular Molete Under-Bridge in Ibadan Oyo State on Saturday evening has been released.

We learnt 15 people died in the incident involving a fuel tanker that lost its brake around 9pm and fell, splitting all its content (Petrol) on the road.

The fuel connected the nearby drainage and trav­elled a long distance before it caught fire.

Within 2 minutes of the tragedy, passerby, motorcyclists and motorist in the vicinity suddenly saw themselves in the middle of a raging fire.

An 8month pregnant woman and her child as well as another woman with her 2 kids were among the victims of the disaster. 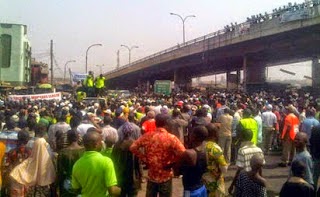 According to eyewitnesses, the tanker was coming from Challenge when it suffered a brake failure at Molete Under-bridge.

The driver reportedly lost control of the tanker and rammed into an electrical pole which led to the inferno.

Soccer fans were said to be discussing Nigeria’s loss to Sudan under the bridge when the tragedy started.

The fire was said to have caught up with many people who ran into nearby shops for cover, roasting them alive with the shops.

The driver of the tanker who reportedly shouted ‘brake failure!’ repeatedly in order to alert people of the impending danger was also killed in the raging fire.

Oyo State Governor Abiola Ajimobi arrived at about 8am on Sunday morning to inspect the inferno scene. He reportedly ordered a crane be brought immediately to remove the carcass of the tanker in order to prevent traffic gridlock.