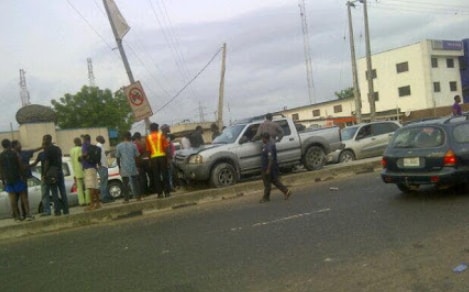 Port Harcourt Based Man Murdered During Visit To Pregnant Girlfriend In Abakaliki, Corpse Thrown Into Ditch

According to local sources, the man had come from Port Harcourt in Rivers State to visit a girl who he intended to marry. The visit was said to be his first since they began to talk on the phone.

Sources added that the deceased stayed with his lover, who runs a small shop near the military cantonment, on Saturday and that they both were going home in the night before they were waylaid by some masked men. Confirming the incident, the state Police Public Relations Officer (PPRO), ASP Loveth Odah, said the body was found close to the military cantonment yesterday morning. She said: “So, she has a private shop somewhere there.

They left the shop and headed to their house. They wanted to sleep in the shop but the boy complained of mosquitoes. So they then headed to the (girl’s) house. “That day was the first time the boy was visiting that girl.

The boy himself is from Ishieke community. May be somebody recommended the girl for marriage. The girl said that as they were going, three boys on masks accosted them and pursued them into a ditch. “She was able to escape but those boys focused on the boy.

They stabbed him to death while she ran for her dear life. So, this morning (yesterday), she then went and narrated the story to an elder in the community. “The elder came and searched through that ditch.

That’s where they found the dead body of this guy.” Odah said there was suspicion that the girl’s former lover might have a hand in the death as the girl is currently pregnant. She reasoned that there was no way a new lover who came for the first time could have put the girl in the family way. The PPRO, however, said investigation had commenced into the matter.