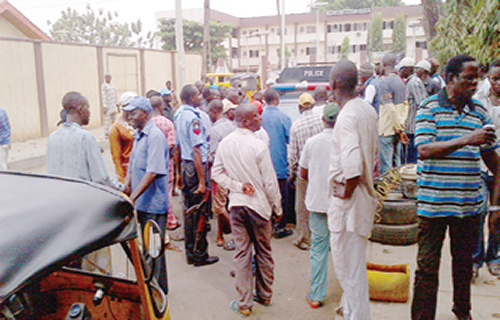 A young man died yesterday in Ibadan, Oyo State, when two rival groups engaged in a free-for-all. Though the state police Public Relations Officer (PPRO), DSP Adekunle Ajisebutu, confirmed that one person died in the clash at Itamerin and Oja’ba areas of the city. However, witnesses said that about six people were killed during the clash.

He said: “Only one person died. The police commission has ordered 24-hour security coverage of the affected areas with a view to protecting lives and property. Some arrests have been made.

Normalcy has returned as the police warn against acts causing breach of public peace.” Accounts of the cause of the incident which paralysed social and commercial activities for about four hours were, however, varied. Some people said the chaotic situation was a daily occurrence in the areas as rival groups constantly engaged in supremacy battle over trivial issues.

Another source, however, said that the crisis had started about three days ago but got to a head yesterday when dangerous weapons such as guns and clubs were reportedly used. It was learnt that the groups clashed over collection of fee from a truck driver while offloading goods.

The source said close to 15 people died in the clash.