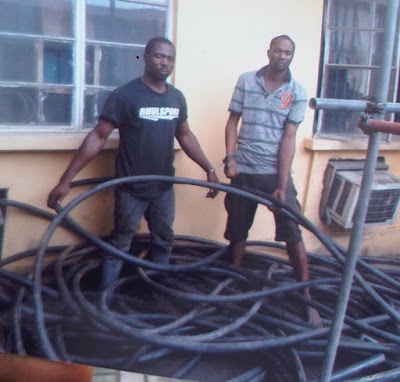 Also arrested in connection with the theft is the alleged receiver and buyer of the stolen cables.
The incident, according to the police, occurred at about 5 a.m. along Agoro Diyan Street, Victoria Island, Lagos, on 22 February, 2016.

The police identified the suspects as Ellias Odiyan, 37, Bolarin Ariyo, 37, and the alleged buyer of the stolen cables, Abdulahi Suleiman, 25.

Police said some of the items recovered from the suspects include chisels, jack knives, cutlasses, saw blades and about 50 pieces of vandalized cables.