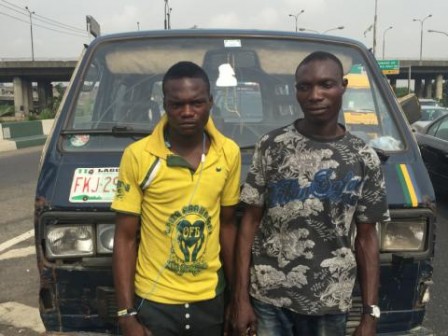 A bus driver identified as Tunde Sanni and his conductor Sunday Asapo have been arrested for impersonating officials of Lagos police command.

The suspect were caught by Police CP Fatai Owoseni on the 3rd Mainland Bridge yesterday during a routine patrol.

They were picking up passengers at Adeniji Adele and Olowu on 3rd Mainland Bridge when they were caught.

The vehicle has been seized as an exhibit and kept at Adeniji Adele Police Station.