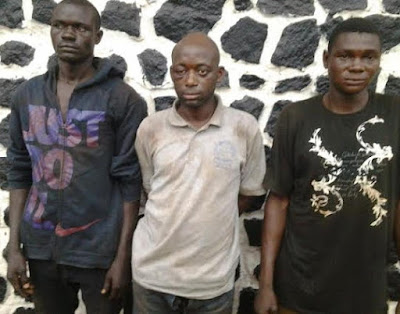 The officials of Kogi State Police command have rescued 4 kidnapped victims at different locations in the state.

3 members of the notorious kidnap gang who operated in cities across Kogi and neighbouring states were trailed and arrested at their hideout close to Egume and Anyimgba towns in Kogi.

The leader of the kidnap gang dressed in grey t-shirt above identified as Ibrahim Nasarawa and 3 others suspects are currently in police detention.

The rescued victims who sustained various degrees of injuries in the hands of their abductors are now receiving treatment in the hospital.

Continue Reading
You may also like...
Related Topics:arrested, kidnappers, kogi

Photos: See The Terrorist, Truck Driver Who Killed 84 In Nice France On Thursday
Ex Wife Of Nice Attacker & 4 Others Arrested As ISIS Claims Responsibility For The Attack